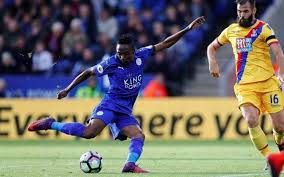 Everton led when Romelu Lukaku turned in substitute Gerard Deulofeu’s cross from close-range in the 63rd minute – but optimism that they would beat a top-flight team at this stage of the competition for the first time in 29 years was swiftly extinguished.

Musa, a first-half replacement for injured Leonardo Ulloa, scrambled home an equaliser within three minutes then linked brilliantly with Danny Drinkwater to beat Everton keeper Joel Robles with a crisp finish after 71 minutes.

Everton were unable to respond and the final whistle from referee Martin Atkinson was met with jeers as manager Ronald Koeman’s hopes of challenging for a trophy in his first season in charge disappeared.

Koeman’s appointment and the manner in which he was lured from Southampton after guiding them to sixth place last season was a signal of Everton’s renewed ambition under new majority shareholder Farhad Moshiri.

And that was underlined again this week with further discussion of a new stadium on the banks of the Mersey at Bramley Moore Dock and a lucrative naming rights deal for their Finch Farm training base with USM Holdings, the company founded by billionaire Arsenal shareholder Alisher Usmanov.

But it was a brutal reality check when their hopes of a first trophy since 1995’s FA Cup win over Manchester United were extinguished by Leicester City.

Koeman’s summer work in the transfer market was not as widespread as hoped and even that had been undermined by the long-term injury to £25m signing Yannick Bolasie.

Everton remain a team in need of major surgery. They are too reliant on Lukaku for threat and goals, short on legs and energy in midfield, exposed by pace at the back and without a top-class goalkeeper. They are team that too often lack urgency and inspiration.

This season has not been the shiny, bright new start Everton had hoped for under their high-profile Dutch manager and reality dictates that their main goal between now and the end of the season is to simply maintain their current seventh place in the Premier League.

Golden new era at Goodison Park under Ronald Koeman? Not yet.

It would have been easy for Leicester to go under once Lukaku gave Everton the lead – but there is still plenty of fight and resilience left in the team that won the league in such magnificent fashion last season.

The Foxes, even without Jamie Vardy and Riyad Mahrez, responded instantly with that scrappy Musa goal, but there was nothing ugly about a winner that was beautifully constructed between the substitute and Danny Drinkwater.

And manager Claudio Ranieri’s decision to field a strong side, giving a debut to impressive £15m new boy from Genk, Wilfred Ndidi, was an indicator that he is taking the FA Cup seriously.

This was a performance that showed signs of the Leicester City of last season and their supporters celebrated in style in a corner of Goodison Park at the final whistle.