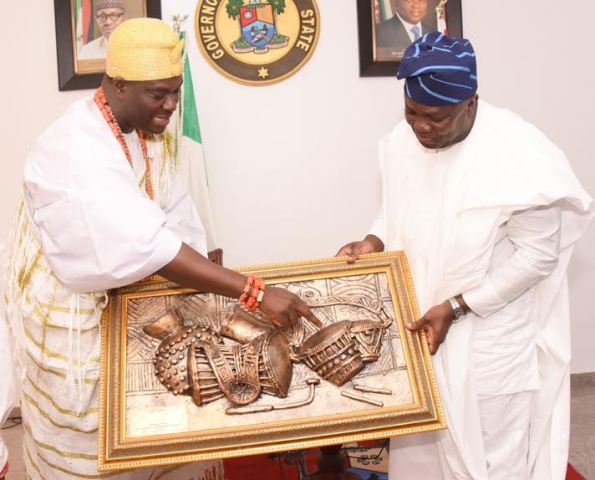 Lagos State Governor, Mr. Akinwunmi Ambode (right), being presented with a Art frame by Ooni of Ife, Oba Adeyeye Enitan Ogunwusi, Ojaja II during a courtesy visit by the Ooni of Ife at Lagos House, Ikeja, on Wednesday.

The Ooni of Ife, Oba Enitan Adeyeye Ogunwusi has charged Governor Akinwunmi Ambode of Lagos State to partner with Southwest States to boost agricultural productivity in the state.

Ogunwusi, who paid a visit on Ambode on Wednesday at the State House, Ikeja, Lagos, Southwest Nigeria said he heard of the LAKE rice, a partnership between Lagos and Kebbi State in December, saying that there was so much land in the Southwest that Lagos could leverage on to boost food security.

“We can partner in the area of food security, we have land for agriculture same in Oyo, Ekiti, Ondo,” he said, while lamenting that 80 percent of all the products from those farmlands were wasted.

“It is only about 20 percent that gets to Lagos State from Maiduguri. If only we can synchronize and work together on how to take food security to another level,” he added.

He also said traditional rulers in the country had great role to play in governance, saying that everything should not be left for the government alone.

Speaking, Ambode said there were plans by his administration to integrate the six States in the South West region to the food security drive of the government, especially in addressing the demand and supply deficit for the overall benefit of the people.

He also vowed his commitment to the economic growth and promotion of the traditional values and culture of the Yoruba nation.

The governor recalled that in the last one year, the state government joined the Oodua Investment Group in addition to the acquisition of land in Ogun and Oyo States for agricultural purposes, saying that government would scale up the economic integration of the South West States as well as the cultural heritage of the region.

While commending the Ooni for his achievement in office so far, Ambode said the visit to Lagos was historic in the annals of his administration coming barely few weeks after the first year anniversary of the coronation of Ooni.

He said: “One year after, it has become very evident that everything and every step that Ooni has taken has been for the positive good of the Yoruba nation. The Ooni represents the cohesion that we are looking for in Yoruba land and for that reason, we will do everything to continue to ensure that this government support the cultural heritage of the Yoruba people.

“We are glad to note that within the last one year also, Lagos State has been able to join the Oodua Investment Group as part shareholders of that economic vehicle that we will use to power the economic integration of the Southwestern states. We want to assure your majesty that what you stand for is what this government also stand for.

“We believe that we cannot afford to waste away the cultural heritage of the Yoruba people and we are to start from a platform where it moves away from economic integration to socio, political and also cultural evolution of what we think the Yoruba people stand for and that is also what I stand for.

“I believe strongly that the test case of what we are trying to do about food security in Lagos State is just more or less like an elixir for what it should be across the western region and on that note, we want to say that we have already acquired land in Ogun and Oyo States but what is imperative for us to move forward now is that we would integrate all other Southwestern States into the food security mechanism of demand and supply for us to move forward,” he said.

The governor said Lagos, as a cosmopolitan State and the economic hub of the Yoruba people in terms of commerce, must be at the vanguard of promoting commerce in the region, assuring that his administration would vigorously pursue such to the benefit of the people.

He added: “Everything Ooni has said on food security is in consonance with our believe and we believe that if we move forward, Nigeria will also move forward. The future is brighter as we see it and we will not relent to ensure that our traditional values and culture are enhanced further than what it is presently.”

Besides, Ambode thanked the monarch for promoting continuous communication among traditional rulers and government for the purpose of enhancing the future of the Yoruba people, while also acknowledging his immense contribution to the development of tourism, trade and commerce in Lagos State.