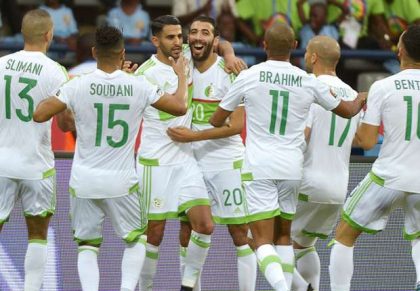 Riyad Mahrez scored twice as Algeria left it late to earn a 2-2 draw with Zimbabwe at the 2017 Africa Cup of Nations (AFCON) on Sunday.

The Leicester winger had put his side ahead with a curling shot in off the post.

But Kudakwashe Mahachi’s low shot into the corner and a Nyasha Mushekwi penalty kick made it 2-1 to Zimbabwe — a lead they held until the 82nd minute.

Algeria hit the bar twice before Mahrez levelled with a speculative 25-yard shot that Zimbabwe goalkeeper Tatenda Mukuruva should have saved.

While Mukuruva may feel embarrassed at his error, Algeria just about managed to save their own blushes as they rescued a point from their Group B opener.

It was a match they were very much expected to win.

Zimbabwe, making their first appearance at the finals since 2006, will perhaps count themselves a little unlucky after playing some excellent football.

Khama Billiat was superb for Zimbabwe, only denied a spectacular 30-yard goal by an outstanding fingertip save from Algeria goalkeeper Rais Mbholi, who diverted the ball onto the post.

Mbholi thwarted Billiat on more than that one occasion and also produced a brilliant save with his leg to keep out Cuthbert Malajila’s shot when the score was 2-1 to Zimbabwe.

But Algeria improved considerably after the interval and forced Zimbabwe back.

They hit the woodwork twice, through a Ramy Bensebaini header and when Zimbabwe defender Elisha Muroiwa narrowly avoided an own goal when he sliced a clearance.

Mahrez, winner of two Footballer of the Year awards just a few weeks back, proved their saviour, even if it will not go down as the cleanest strike he has ever hit.

And the Desert Foxes had chances to win the match, particularly when Mukuruva came flying out and left his goal wide open but Yacine Brahimi could not take advantage.

The Warriors will, however, take heart from their performance.

They lost a key player in Knowledge Musona through injury after only 12 minutes and recovered from 1-0 down to cause Algeria a mighty scare.

Mamelodi Sundowns’ star man Billiat was on top form and will cause any defence problems.

Mahrez who won the BBC and Confederation of African Football (CAF) awards has got off to a terrific start, but some of Algeria’s other big names were not up to speed.

Islam Slimani missed a great chance to score when he headed weakly and Brahimi can certainly produce more.

But the Desert Foxes showed resilience — a necessary quality in tournament football.