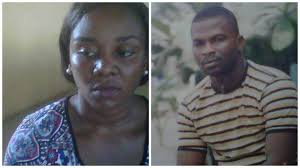 A 41-year old bank staff, Raymond Olisa Okani has been arrested and charged before a Lagos court for allegedly battering his wife, Nkiruka, 36, after denying her sex as punishment for two years in Lagos State.

The incident happened at 511 Road, Gowon Estate in Egbeda, Lagos where they reside. His arrest and arraignment followed a petition to the police by a human right group who had tried every means to settle the matter but instead it was getting worse due to the man’s constant assault on Nkiruka.

Apart from the assault and sex denial, he reportedly abducted their three children and hid them at an undisclosed place suspected to be his mistress house. Okani, who hails from Abagana in Anambra State, married Nkiruka, from Nsukka, Enugu State.

An embattled Nkiruka said that their 7-year-old marriage started facing problem two years ago when Raymond suddenly started coming home late from work, with the excuse that he was assisting their female boss in the office and thus stopped sleeping with her.

She said he ordered her to move all her property from their bedroom and restricted her to their children’s room.

She narrated that when the burden became unbearable to her as he has stopped providing for the family and at a point asked her to leave their matrimonial home so that he could bring another woman, she refused mainly because of their children and then he resorted to constantly beating her.

She said out of frustration, she went to a human right group office at Ikeja and reported her predicament. He was invited but he refused to come for amicable settlement of the matter Pm Express reports.

She said following his refusal by both families and the human right organisation, the matter was reported to the police who arrested him and charged to court for assault and abduction of the children under the Criminal Code.