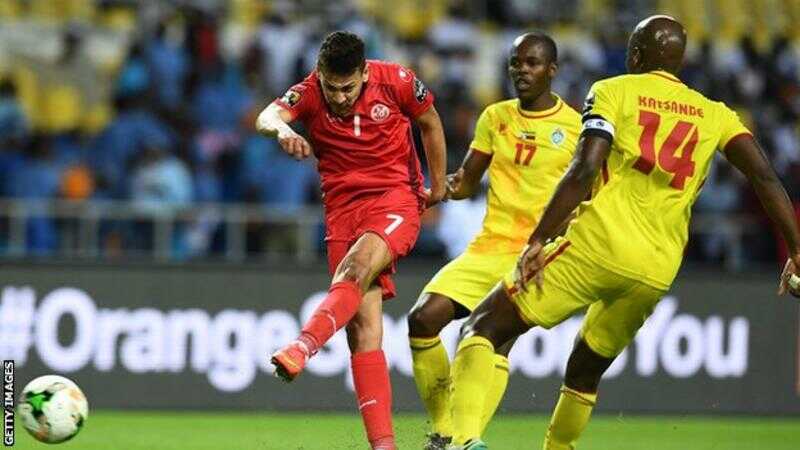 A Tunisia slug it out with two Zimbabwe players

Tunisia secured their place in the Africa Cup of Nations quarter-finals as Group B runners-up with an easy win over bottom team Zimbabwe.

Knowledge Musona grabbed one back but a Wahbi Khazri penalty restored Tunisia’s three-goal cushion by the break.

Tendai Ndoro prodded in a Zimbabwe counter, before Khenissi hit the post in a wasteful second half.

The 2004 champions go on to play Burkina Faso in Gabon’s capital Libreville on Saturday.

In the group’s other game, a much-changed Senegal, already qualified as group winners, drew 2-2 with Algeria, who finish third and are eliminated.

Senegal, runners-up in 2002, will play Group A runners-up Cameroon in the last eight.

Tunisia only needed a draw to progress to the knockout stage following their 2-1 victory over Algeria on Thursday.

And they were rarely stretched as Zimbabwe failed to conjure anything like the quality of their opening performance, a surprise 2-2 draw against the Algerians, much-fancied before the tournament started.