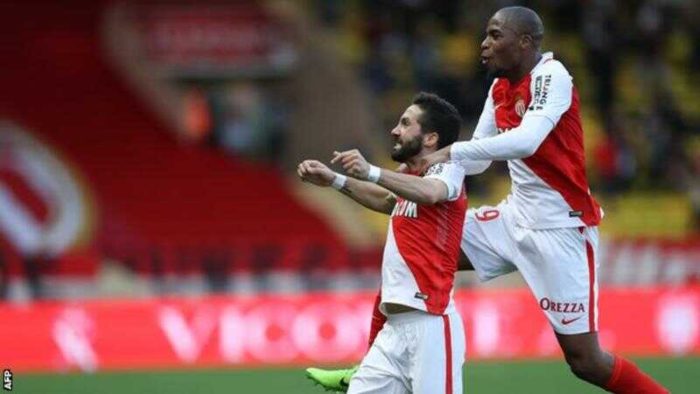 Monaco celebrating one of their goals

Monaco opened up a five-point lead over second-placed Nice at the top of Ligue 1 with victory over Bordeaux.

Kylian Mbappe slotted home on 68 minutes, before Joao Moutinho found the top corner with a wonderful curling effort from outside the box just six minutes later.

BBC reports that a mistake by Monaco goalkeeper Danijel Subasic allowed Diego Rolan to pull a goal back for Bordeaux on 84 minutes.

Monaco host Manchester City in the Champions League on Wednesday.

Leonardo Jardim opted to leave top-scorer Radamel Falcao on the bench, but they needed his help to break the deadlock as he set up 18-year-old Mbappe’s 10th league goal of the season, shortly after coming on.

But the Colombia striker departed late on clutching his ribs after a heavy challenge from Bordeaux defender Nicolas Pallois.

Nice’s draw with Caen on Friday moved them above Paris St-Germain into second place on 63 points.

Unai Emery’s third-placed PSG side will hope to bounce back from their 6-1 midweek defeat by Barcelona as they were knocked out of the Champions League, when they face Lorient on Sunday.