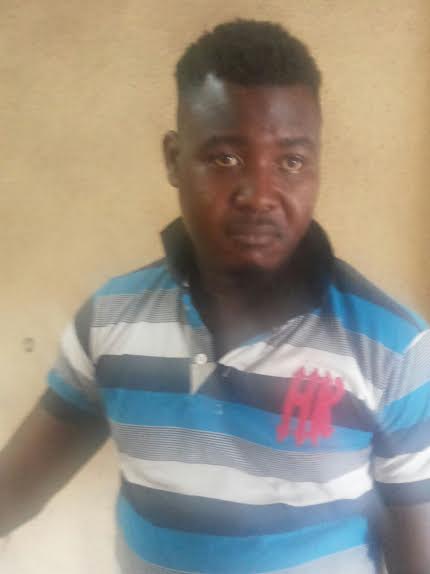 The danfo bus driver who attempted running over LASTMA GM


The General Manager, Lagos State Traffic Management Authority (LASTMA), Olawale Musa escaped death by the whisker as a commercial bus driver, David Agiri, driving with a stolen vehicle with number plate FKJ 875XC at Oshodi area of the State almost ran over him in a bid to escape.

He was however arrested by LASTMA officials.

Agiri, who has been on the wanted list of the Agency since February 23, 2017 for driving against traffic at Iyana Iba, on Lagos- Badagry Express Way in contrast to the relevant sections of the Lagos State Traffic Laws which forbids driving in the direction of oncoming vehicles, had evaded arrest from the hands of the traffic personnel.

However, in line with the policy of the Agency which forbids officers from pursuing fleeing vehicles, Agiri escaped arrest with the bus.

But the long arm of the law later caught up with him when he was eventually arrested with the same vehicle last Thursday, March 9, 2017 at Oshodi.

In addition, Agiri who is a native of Badagry and a resident of Agbara town in Ogun State was said to be a well-known serial traffic offender with penchant for driving against traffic.

Commenting on the incident, Musa said the Agency’s monitoring team on routine patrol of Lagos roads caught the driver of the unpainted commercial bus at Iyana-Iba driving against traffic and that efforts to apprehend Agiri proved abortive as he mobilised social miscreants to attack the traffic officials.

Agiri, who has been handed over to the Nigeria Police, Mosafejo Division for further investigation and appearances before the court of competent jurisdiction, confessed to flouting the traffic laws and that the number plates found on the vehicle did not actually belong to him.

Speaking further, the LASTMA boss assured that the Agency would not relent in ensuring seamless flow of traffic in the State, adding that impunities by some motorists would also not be condoned.

According to Musa, the era of fragrant disobedience of traffic laws in the State was over for good, warning commercial bus drivers not to constitute themselves into a nuisance in the State as anybody caught violating the law would be dealt with accordingly.

It would be recalled that the Agency had begun series of monitoring and patrolling of major roads in the State in a bid to stem the activities of traffic law violators and maintain the existing orderliness and sanity being enjoyed by commuters in Lagos State.