Revealed At Last! Buhari Is Suffering From Anaemia 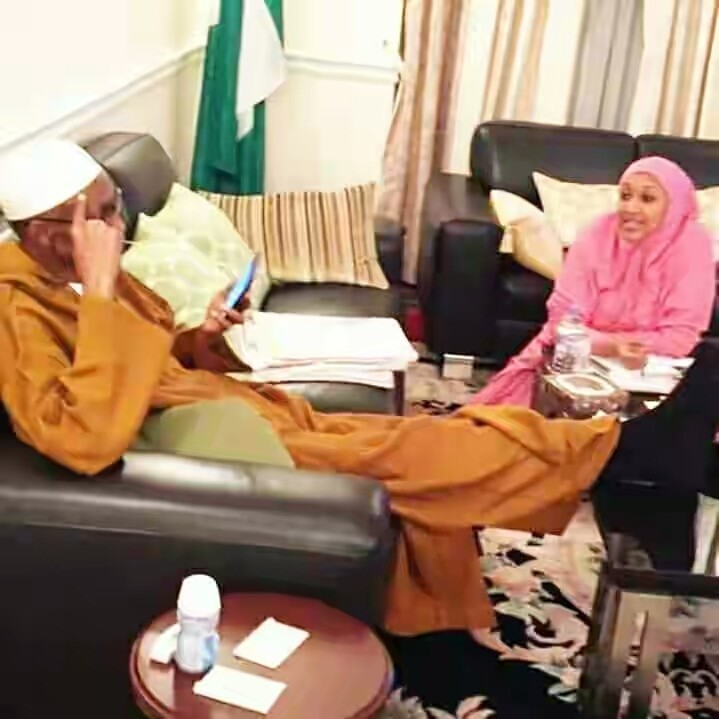 President Muhammadu Buhari and his daughter, Hadiza, in London

This, the certified physician in Anatomical Pathology from London and Ireland, told The Nation in an interview, could only have been responsible for the blood transfusion which the president got during his medical vacation in the United Kingdom.

Buhari admitted on his return home on Friday that he had transfusion in London.

“We now have a pretty good idea of diagnosis, which is now comprehensive or good enough to say that the diagnosis of President Buhari’s illness is anaemia,” Williams said.

“You cannot be transfused if you don’t have anaemia,” he explained.

His words: “the negative clinical findings on the president that was published in The Nation on Feb 26, 2017 has been confirmed by the disclosure that the President was transfused with whole blood.

“In a previous photo of his hands prior to transfusion his nail beds were very pale indicative of clinical anaemia. The subsequent photograph of his hands that was analyzed showed that he was no longer clinically anaemic.

“The clinical history given by Mr. President that for the past 18 months he had been lethargic and feeling tired prior to his vacation is consistent with tiredness due to anaemia.

“Regaining his strength after transfusions that facilitated his return home suggests that the anaemia had been corrected successfully.

“There is therefore a preliminary diagnosis of anaemia meaning insufficient blood in the circulation.

“When this happens many organs including the brain, heart, liver, kidneys and lungs are starved of oxygen that is carried by blood to all parts of the body for efficient functioning of the person. “Sudden loss of blood as in road traffic accidents could be fatal. In this case the anaemia has been insidious and gradual over time.”

Continuing, Prof Williams said: “The question that arises in the absence of information, which is understandable, is the cause of the anaemia.

“The only information that can be gleaned from the President’s history on arrival is his admonition against self medication. By so doing, is he giving us some more relevant information that he had been told in London?

“This is the first time that a President advises that all citizens should trust their doctors and refrain from self medication.

“Is it possible that his anaemia is drug induced or drug related and that investigations in London revealed this? We do not know. If this is true, common pain relieving drugs like Panadol may cause kidney damage and give rise to anaemia for which he received transfusions.”

“Alternatively certain drugs also cause liver damage and anaemia but this is unlikely in his case since he was not jaundiced.”

But he also admitted that “there are so many other causes of anaemia that cannot be dealt with here.”

“Of relevance to our last observation is the possibility that this may be anaemia related to some type of cancer that must be ruled out. Looking at the photos on arrival there is one suspicious positive finding and that is his loss of muscle mass on the face in the area of the zygomatic arch below the ears.”

“This is either due to some cancer somewhere or due to aging.”

He said that the little snippets of information from the President’s history and disclosure on his health status may help millions of Nigerians damaging their vital organs from unbridled ingestion of over the counter (OTC) pain relieving and other drugs.”

He urged adequate publicity on the adverse effects of self medication and described the President’s view on the issue as a big public service to the health sector.

“Assuming this is the correct scenario, the nation owes the president a debt of gratitude and if this is not correct the president has done a great service by highlighting the adverse events and dangers of self medication that is so rampant in the nation,” he said.