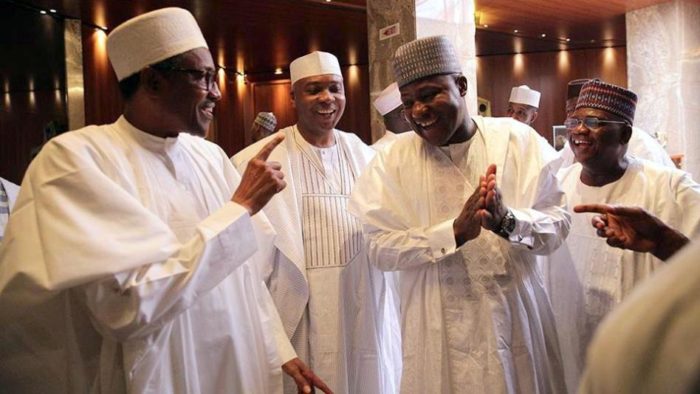 Speaking after the closed door meeting with the president, Saraki, who was accompanied by the Speaker of the House of Representatives Yakubu Dogara, said they were delighted that the president was back in his office.

“The president met with us. We were there for over 40 minutes. I was not talking to myself. So, you know he was responding.

“We were engaging. He engaged us very well. We discussed issues of national interest, we are well happy to see him back, he is back at the office, and he is doing his work.

“Budget is ongoing. The economy, things that we passed in his absence including the (Chief Justice of the Nigeria) CJN issue; issue to do with the Eurobond.

‘’Just general issues that are pending and some other issues like the ambassadorial nominees, stability in the Niger Delta – a lot range of issues we covered in the short period of time,’’ he said.

On the 2017 budget proposal, Saraki said that it would be passed before the end of March.

Also, Dogara pledged that the National Assembly would continue to collaborate with the presidency to achieve the desired goal of uplifting the quality of life of all Nigerians.

“We expect to cooperate more than we fight in the interest of our people to ensure that there is progress. It is one government, there is no division.

“If he (President Buhari) fails we all failed.

“So, it is in realisation of this that we always extend the needed support to ensure that he succeeds so that our government will be rated as a successful one,’’ he said.