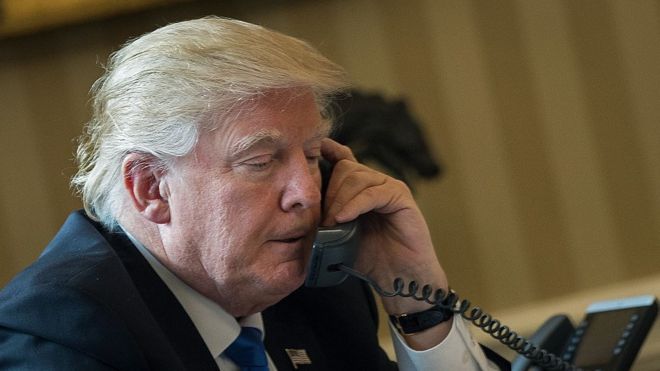 Trump on phone call to Buhari

There are “no indications” that Trump Tower was under surveillance by the US government before or after the election, a Senate committee has said.

Mr Trump had accused his predecessor Barack Obama of wiretapping Trump Tower during the presidential race.

“He stands by it,” Mr Spicer said at a daily news briefing on Thursday.

Mr Burr joins a cadre of Republican lawmakers who have rejected the allegation.

“Based on the information available to us, we see no indications that Trump Tower was the subject of surveillance by any element of the United States government either before or after Election Day 2016” Mr Burr said in a joint statement with Senator Mark Warner, the committee’s vice-chairman.

Republican chairman of the House intelligence committee Devin Nunes said on Wednesday he doesn’t believe “there was an actual tap of Trump Tower”.

But that has not deterred Mr Trump, who on Wednesday told Fox News a “wiretap covers a lot of different things”.

He also hinted that more details about the alleged surveillance could be revealed in the coming weeks.

“Wiretap covers a lot of different things. I think you’re going to find some very interesting items coming to the forefront over the next two weeks,” he said in an interview broadcast on Wednesday night.