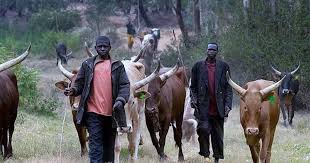 A middle aged farmer, simply identified as Elder Samson, arrested a cow and tied it down for allegedly destroying crops on his farm at Sabon- Gari, Abaji.

A resident of the area, Yahaya Aliyu, said the incident happened on Wednesday morning when the farmer met cows eating some of the yams he had already planted on ridges.

He said the farmer arrived his farm at about 9:00a.m and saw a herder removing the already planted yams from the ridges and giving them to his cows.

“When the herder saw the farmer coming, he escaped and the farmer arrested one of the cows and tied it up, got a pick up van which took the cow to the council secretariat,” he said.

When contacted, the Abaji Divisional Police Officer (DPO), CSP David Kolo, confirmed the incident, saying the arrested cow has been brought to the police and was still waiting for the owner to come forward to claim it.

The DPO added that a similar incident happened recently when a farmer arrested two cows and brought them to the police station after the cows destroyed his crops. “And we have been able to get a court judgment on those two cows which are still at the police station.

The court had ordered that since nobody came to claim ownership of the cows, they should be sold out and the money be used in compensating the affected farmer,” the DPO added.