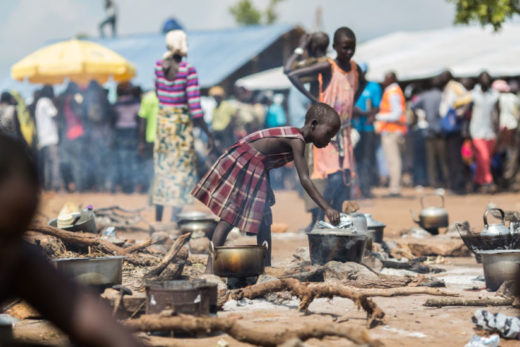 The number of South Sudanese fleeing their homes is alarming, the Office of the UN High Commission for Refugees (UNHCR) has said.

It said 1.6 million people have either been displaced or fled to neighbouring countries in the past eight months ago.

“A famine produced by the vicious combination of fighting and drought is now driving the world’s fastest-growing refugee crisis,” the spokesperson for the office, Babar Baloch, said.

Baloch added that “the rate of new displacement is alarming, representing an impossible burden on a region that is significantly poorer and which is fast running short of resources to cope.

“Refugees from South Sudan are crossing the borders to the neighbouring countries.

“The majority of them go to Uganda where new arrivals spiked from 2,000 per day to 6,000 per day in February, and currently average more than 2,800 people per day.

“The situation is now critical; recent rains are making the humanitarian situation more difficult,” he warned.

The UN agency reiterated its calls for financial support, saying aid for South Sudanese refugees is only eight per cent funded at 781.8 million dollars.

“The situation in Uganda is a first and major test of the commitments made at the Summit for Refugees and Migrants last September”, the spokesperson said.

The head of the UN peacekeeping mission in the South Sudan (UNMISS), David Shearer, told a meeting of the African Union Peace and Security Council in South Sudan, that the security situation in the country was worsening, and national authorities are not taking action.

“The situation in South Sudan continues to deteriorate and generate profound human suffering for the population of that country, suffering in which local and ethnic divisions have been exploited for political ends,” Shearer warned.

He added that the recent escalation of fighting in Equatorial, considered the food basket of South Sudan, has led to a significant displacement of civilians and disrupted food production for the country.

The UNMISS head said intense fighting was also reported in the Upper Nile while satellite imagery showed much of one town, Wau Shilluk, destroyed and deserted.

He reiterated concerns about the humanitarian situation in the country, calling the ongoing crisis “entirely man-made”.

He said an estimated 100,000 people are facing starvation and an additional one million are classified as being on the brink of famine.

Shearer, who is also the Special Representative of the Secretary-General in the country, urged access for humanitarian organisations and the UN mission.