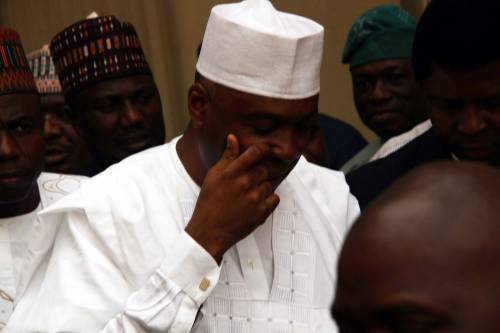 There was a mild drama today at the Code of Conduct Tribunal (CCT) in Abuja as Paul Erokoro, counsel to Senate President Bukola Saraki, and Rotimi Jacobs, representing the federal government, engaged in a shouting match over a self-confessed attempt by the defense counsel to mislead the prosecution witness during cross-examination.

It began when Mr. Erokoro asked the witness, Samuel Madojemu, to specify when he visited the property located at No 15 and 15B MacDonald Street, in Ikoyi, Lagos, which is alleged to belong to Mr. Saraki.

The lawyer subsequently reframed and twisted the question, apparently in an attempt to confuse the witness, who said he could not remember.

Unsatisfied with that answer, and seeking to elicit a particular response, Mr. Irokoro again attempted to twist the same question, to which Mr. Jacobs objected, affirming that the defense was trying to confuse his witness and praying the court to protect him from harassment and intimidation by the defense.

Erokoro, in response, screamed at Mr. Jacobs. “I am entitled to confuse and mislead the witness,” he asserted. “That is why I am here and to show the court that the witness is not truthful.”

He accused the witness of having visited the property after he had submitted his evidence-in-chief, saying that it amounted to giving anticipatory evidence.

The situation was brought under control when the Chairman of the Tribunal, Danladi Umar, appealed to both parties and urged the prosecution to allow the defense to cross-examine the witness. He noted that the prosecution also had the right to re-examine his witness.

Earlier, as the trial resumed, the prosecution had accused the tribunal of giving the defendant two representations by allowing the two counsel to ask questions, saying that was unfair to his witness.