Drama in court as defence counsel withdraws from EFCC case 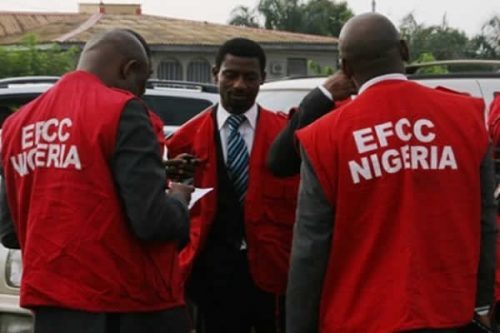 There was a mild drama at the Federal High Court II, Jos, on Tuesday when a counsel, Mr Solomon Umoh (SAN), withdrew from representing an accused, Ibrahim Suleiman, being tried for allegedly laundering N400 million belonging to a bank.

Umoh has been defending the accused since 2007, when he was arrested by EFCC and arraigned before Justice Ayo Emmanuel of the Federal High Court.

The accused had, in June 29, 2007, allegedly hacked into the system of the defunct First Inland Bank plc, transferred and distributed the amount into his private account and different others without the knowledge of the bank.

The bank only came to know about the racket after sometime and reported the matter to EFCC, which arrested and arraigned him before Justice Emmanuel on Oct. 28, 2007.

Suleiman is currently being tried on seven-count charge on money laundering contrary to Money Laundry Prohibition Act of 2004, among others.

When the case came up for hearing on Tuesday, Umoh, through one of his associates, Mr Nanfwang Gwanson, announced his withdrawal.

He said “at this stage, my hands are tied and I can’t continue with this case’’.

Trouble began for the defence counsel, when two of his vital witnesses failed show up in court to testify and the alleged ill health of the accused which made him unable to testify in his own case.

The defence counsel, EFCC prosecution counsel and the trial Judge, who always traveled to Jos from Ibadan, had agreed in February to adjourn for April 24 and 25 to sit and listen to all three defence witnesses, including the accused, to complete the 10-year old case.

But when the case came up, only one witness showed up and was taken; thereafter, Gwanson lamented the absence of the remaining two witnesses.

The Judge then asked the counsel to take on the accused, Suleiman, to make up for the efforts and time taken for the trip from Ibadan but Gwanson declined, saying it was not possible.

The defence counsel produced and tendered a medical report from a hospital, Victoria Memorial Hospital, which said that the accused had been granted five days excuse duty and so not in good health to testify.

“My Lord, right now the accused has just reported to me that he is having a split headache and cannot testify before the court today.

“As you can see on the medical report on the health condition of the defendant, he won’t be able to testify today; we hereby urge the court to subpoena the remaining two witnesses to appear before your lordship on the next adjourned date.

“My lord, we don’t have the coercive power to drag them to court, but we believe the court has such power and should subpoena them to come by force; we also wish to call one Bindawa before the other witness, to wrap up,” he told the court.

It was at that stage that the EFCC counsel, Mr Comas Egwu, opposed the application for adjournment, describing the application as “delay tactics’’ which should not be entertained or granted.

“My lord, we did all agree at the last sitting to take all witnesses today, including the defendant, and for them to start telling us stories that they can’t bring them today is unacceptable.

“The witnesses are their people and they know where they are; the onus lies with them to bring them and not to keep delaying this case.

“The defence, in this matter, has continued to be unfair to us; we came all the way outside this jurisdiction to take just a witness is very unfair, ’’ Egwu said.

The prosecution said “the grouse on the adjournment is completely immaterial and doesn’t add up at all.’’

“My Lord, last time we sat, it was one excuse to the other and today again the defence is talking about medical report and subpoena for another adjournment.

“I hereby urge the court to refuse the application of the defence counsel and urge them to be serious for us to continue with the case as expected, ‘’’ Egwu urged the court.

In his ruling, Justice Emmanuel declined the application for an adjournment.

`The last adjournment was at the instance of the defence counsel and today again, they are asking for another adjournment after we all agreed to be serious with the business of the day.

“The two medical reports of the defendant are contradictory as one is Mercy Crest Medical and the other from Victoria Memorial Hospital and have to show lack of seriousness on the side of the defence.

“The medical reports and the desire to introduce One Mr Bindawa as witness and the request for adjournment are but ploy to delay this case as the reasons are most untenable and hereby refused and I urge the defence to continue with their case, ’’ the judge ruled.

It was at this stage that Gwanson announced to the court that “I am constrained to withdraw representation for the defendant’’.

“We would have taken step to continue but the witnesses are not here and the defendant is not in good health to testify and we have no option but to withdraw from this case,’’ Gwanson said.

The judge, however, asked the accused person what he intended to do since his counsel had withdrawn their service from him.

Suleiman said he would need time to get another lawyer that would represent him in court.

The judge then adjourned the case till tomorrow for continuation of hearing.