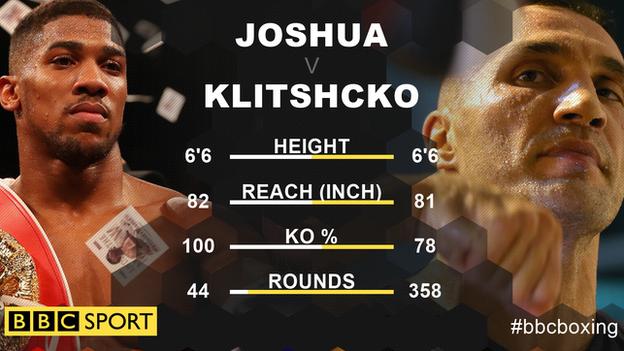 Anthony Joshua says he will be competing at a “whole new level” when he takes on Wladimir Klitschko in Saturday’s world title bout.

The two heavyweights fight for the IBF title and vacant WBA belt in front of 90,000 fans at Wembley.

Joshua, 27, says his 13 weeks of preparation have been “tougher times than I have had in any walk of life”.

Klitschko, 41, lost his heavyweight title to Tyson Fury in November 2015 – his first defeat in 11 years.

In an interview at his Sheffield training camp before the biggest fight of his career, Joshua spoke about his motivation, being a “man of the people”, the state of British boxing, and his family.

Joshua on the fight

Joshua, unbeaten in 18 fights since turning professional in 2013, said he is not worried about his safety in the ring because of the intensity of his training before the fight.

“I think I take more punishment in the gym than I do in the fights. Sometimes I try things and it doesn’t work and I’ve broken my ribs, my hand, dislocated shoulders in the gym but we get it right for the fight.

“One of the main things is his mindset at the minute. He claims he is obsessed and I ask ‘What is he obsessed about?’ I look at myself in the mirror and it is about beating me.

“I’ve lived simple. I’ve been training under the dark light so I can shine under the bright lights on April 29.”

Joshua had numerous incidents with the police as a youth, including being arrested for ABH, drug possession and being electronically tagged. He has previously stated that he would have been in jail were it not for boxing.

But Joshua said: “I’ve had tougher times in the gym than I have had in any walk of life at the minute.

“I put myself through it and it is important to because I don’t want to be star of the gym and then when I get to the fight it’s like: ‘I’ve never faced this type of warrior before.'”

Joshua on his future

“But I’ve still got so many more years. I’m confident. I’m learning about myself, so this fight is, for me, one fight that I’ve got to take in my stride round by round and when I take that attitude the victory comes and we move on and there are so many other big fights in the UK.”

Joshua does not believe Klitschko has underestimated him, saying: “He’s coming game, he’s coming ready, and the body does what the mind tells it. His mind seems to be in the right place so I’m in for a tough fight.”