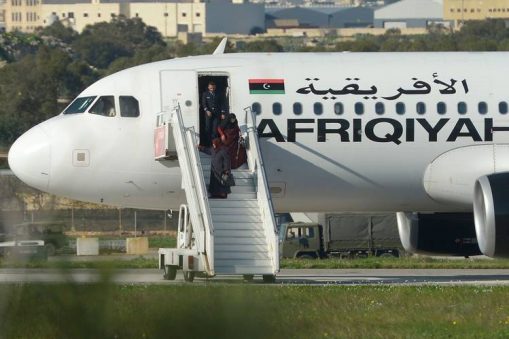 A group of hostages are released from the Libyan plane after it was hijacked and landed in Malta Airport.

The News Agency of Nigeria (NAN) reports that the aircraft landed about 6.45pm at the Murtala Muhammed International Airport, Lagos.

The returnees were made up of of 102 males, 140 females, six children and five infants.

They were brought back by the International Organisation for Migration (IOM) and the Nigerian embassy in Libya.

The returnees were received at the Hajj Camp area of the airport by officers of the Nigerian Immigration Service (NIS) , the National Agency for the Protection of Trafficking in Persons (NAPTIP) and the Police.

Also on ground to receive them were officials of the National Emergency Management Agency (NEMA) and the Federal Airports Authority of Nigeria (FAAN).

According to him, one of them was suffering from depression, while the other had severe burns requiring surgical operation.

He said :”Let’s thank God that these ones have returned safely because Libya is not what it used to be.

“As a government, our advice is that young Nigerians should strive to work hard and tap into vast opportunities available in the country instead of seeking greener pastures elsewhere. ”

Bandele said some state governments had initiated various programmes to rehabilitate and reintegrate the returnees back into the society.

He said NEMA would continue to work with IOM to bring back Nigerians willing to return, adding that the programme was continuous.

Speaking to newsmen, the returnee who suffered the severe burns on her face said she arrived Libya in February after making a payment of N300, 000 to her traffickers.

She told newsmen that she suffered the injury while working for her “madam” who only went to dump her at the hospital where she was abandoned.

The returnee, therefore, appealed to the government for assistance to carry out a reconstructive surgery on her face.

NAN reports that a total of 236 Nigerians had in March voluntarily returned from the North African country where they had been stranded enroute Europe.