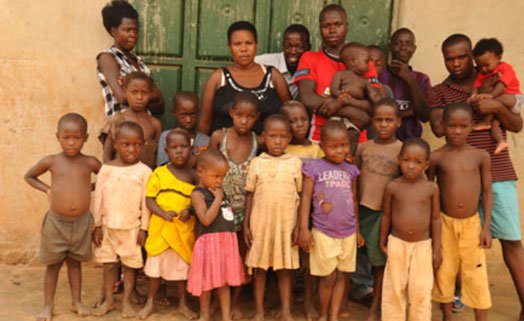 Mariam-Nabatanzi with some of her 38 children (photo Credit: Daily Monitor)

Nalongo Muzaala Bana (the twin mother that produces quadruples) is what Mariam Nabatanzi Babirye goes by where she resides in Kabimbiri village, Mukono District.

At 37, Nabatanzi has 38 children whom she has delivered from home except the last born who is four months old. She was delivered by caesarean section. Among her children are six sets of twins, four sets of triplets, three sets of quadruples and single births. Ten of these are girls and the rest are boys. The oldest is 23 years old while the youngest four months.

Eager to tell her story, she takes a minute before getting into it, tilting her head lost in thoughts. She was married off at 12 years of age after surviving death; allegedly at her stepmother’s hands who apparently pounded glass and mixed it in the food she gave Nabatanzi and her four siblings. Fortunately, she was away unlike her siblings who ate the food and died on the spot.

Nabatanzi breaks down when she recalls what she went through upon getting married. In 1993, she was married off to a 40-year-old man.

“I did not know I was being married off. People came home and brought things for my father. When time came for them to leave, I thought I was escorting my aunt but when I got there, she gave me away to the man.”

Being only a young girl, she found marriage a difficult task in the new family. “My husband was polygamous with many children from his past relationships who I had to take care of because their mothers were scattered all over. He was also violent and would beat me at any opportunity he got even when I suggested an idea that he didn’t like,” she recounts.

Her father-in-law gave them a piece of land to start their family, a family for which she planned to have six children.

In 1994, when she was 13, Nabatanzi gave birth to twins. Two years later, she gave birth to triplets and a year and seven months after that added a set of quadruplets. This, she says was nothing strange to her because she had seen it before in her lineage. “My father gave birth to 45 children with different women and these all came in quintuplets, quadruplets, twins and triplets,” she says.

Indeed, Dr Charles Kiggundu, a gynecologist at Mulago Hospital and President of gynaecologists and obstetricians, says it is very possible for Nabatanzi to have taken after her father. “Her case is genetic predisposition to hyper-ovulate (releasing multiple eggs in one cycle), which significantly increases the chance of having multiples; it is always genetic,” he explains.

By her sixth delivery, Nabatanzi had had 18 children and wanted to stop, so, she went to see a doctor at Namaliili Hospital.

The doctor told Nabatanzi that she could not be stopped then because she had a high ovary count which would eventually kill her if she stopped.

“Having these unfertilised eggs accumulate poses not only a threat to destroy the reproductive system but can also make the woman lose their lives,” Dr Ahmed Kikomeko from Kawempe General Hospital explains.

“I was advised to keep producing since putting this on hold would mean death. I tried using the Intrauterine Device (IUD) but I got sick and vomited a lot, to the point of near death. I went into a coma for a month,” she explains.

At the age of 23 with now 25 children, she went back to hospital to try and stop. “I was checked in at Mulago Hospital and advised to continue producing since the ovary count was still high.”

No way to stop?

Kiggundu explains that women’s ovaries are at times suppressed and stopped from ovulating. “The suppressed eggs later pile up and are released at once and here, the higher the chances of fertilizing many eggs, the higher the chances of all of them dying, Nabatanzi was lucky,” he says. “She must have been super ovulating, releasing many eggs in a cycle.” He adds that Nabatanzi could have been helped if she had really wanted to stop producing, but some people are not well informed.

At the birth of her four-month-old child who was delivered by C-section in December last year, she says; “I asked the doctor to stop me from more births and he said he had ‘cut my uterus from inside’. This was my only Cesarean delivery because I was still weak from the sickness I suffered when I tried to use an IUD.”

Kiggundu says this was most likely tubal ligation. “With tubal ligation, the tubes are blocked, a permanent method of contraception in women, but they would continue having their menses,” explains the gynecologist.

Nabatanzi’s 25 years in marriage have been characterised by humiliation and torture. “I have been tortured countless times by my husband; he beats to the pulp when I try to reason with him over any issue, especially when he gets home drank. He does not provide for basic needs and welfare of the family; the children hardly know who he is since he is an absent father who gives his children names over the phone and not physically,” she says.

Charles Musisi, 23, her eldest son says their father disappeared and they have grown up only with their mother’s love.

“I can comfortably tell you that our siblings do not know what father looks like. I last saw him when I was 13 years old and only briefly in the night because he rushed off again,” he says, adding that they do not know the happiness of living with a father and they only rely on their mother as their both mother and father.

Nabatanzi says her husband spends close to a year without coming home and when he does, he just sneaks into the house late in the night and leaves very early in the morning.

“I carry these humiliations because my aunt advised me to always endure in marriage and have my children as the center of focus. She advised me not to produce children from different men.”

Nabatanzi is optimistic about seeing her children through school, something her father could not do for her. Despite being a Primary Two dropout, she has managed to educate her children.

One of her first born twins has a certificate in nursing and the other in building although they have not found jobs yet.

Two of her other children are in Senior Six, three in Senior Five, Four in Primary Seven, and four in Senior One. The rest are between baby class and Primary Six.

“I am hopeful that my children will go to school because they all have big ambitions of being doctors, teachers and lawyers; I want them to realise these dreams, something I was not able to do.”

Nabatanzi does not have a garden or land to farm, so she has to buy food to feed her children and this is her biggest expense.

“Everything is solely from my pocket; I buy 10kg of maize flour a day, four kilogrammes of sugar a day and three bars of soap. I need to have Shs100, 000 at the least on a daily basis to have the family catered for. God has been good to me for they have never gone a day without a meal,” she says. Nabatanzi is in the process of gathering money to connect piped water she can sell since water is a big problem in the area, with a jerry can costing Shs800.

David Kazimba, who fetches her water, says he gets her 15 jerry cans of water a day. “She is a social person I have known for the last eight years. She is a hardworking and caring woman. At times, people mock her because of her many children but she just ignores them,” he says.

To meet her expenses, Nabatanzi administers local herbs for various illnesses – which she says she has done since she was a young girl- and doing casual work such as plaiting hair, decorating at events, and styling brides.

“I do not despise any job as long as it brings in some money. Feeling sorry for myself is something I dropped because I know these children are a gift from God that I have to treasure, so I try my level best to fend for them.”

Nabatanzi’s five-year-old son who was diagnosed with a heart problem early this year worries her as she has to spend Shs120, 000 a week to buy him medicine. “In January, the doctors at Mulago Hospital advised me to raise Shs35m in nine months to have him taken to India for an operation. Since I do not have this money yet, I buy him medicine to help him cope in the meantime,” she says.

Nabatanzi finds solace in her children as the family she never had while growing up. “I wish I could get a helping hand to help me with my children’s schooling, which is my major concern. I stopped looking to my husband for anything. I’m only focusing on raising my children and I am determined to do,” she explains.

The older children help with their siblings and the general home administration. “I enjoy taking care of my children myself though. My children are my joy and I pride caring for them. I cook, wash and bathe them with ease. Children grow better under a mother’s love and care,” she says.

Nabatanzi says she delivers her children naturally and she has always felt fine after each delivery until her recent C-section birth after which she started to develop backache after doing some home chores.

“My daughter who studied nursing used to take care of me during pregnancy. Eventually, I learnt how to do this, so I have not had any difficulties or complications with my pregnancies,” she explains.

Gynaecologist Dr Charles Kiggundu, refers to Nabantanzi’s ability to conceive so many multiples as “genetic predisposition to hyper ovulate”. He explains;

“It is an increased likelihood of having children in multiples (twins, triplets, quadruplets…) based on a person’s genetic makeup. It results from specific genetic variations that are often inherited from a parent.

In some cases, women ovulate more than one time consecutively, but in other cases they release more than one egg at the same time, leaving room for the fertilisation of released eggs. When that happens, each one develops within its own sac in the womb; hyper-ovulation naturally is hereditary.”

How common it is

I have not seen many of such cases in Uganda; the highest I have seen are twins and one case of triplets, but scientifically this condition is real.

The higher the number of eggs fertilised, the higher the risk of losing all children (miscarrying). Going for anti-natal care during pregnancy helps to have the situation monitored closely, doctors can help.

Although a person’s genetic makeup cannot be changed, some lifestyle and environmental alterations (such as having more frequent disease screenings and maintaining a healthy weight) may help ward off opportunistic health problems.

Nabatanzi says a woman is respected by the way she handles her family and having to settle in her marriage containing all that is there since this is her pride.

“There are no easy marriages; women should be patient because even our great grandmothers did not have a smooth one. They should be patient as there is always a lot to deal with in marriage and it is the patience that heals time, mine is to take care of my children which I am doing happily,” she says Nairobi News reports.

She further urges men to stop marrying off their children for quick money and gains as this not only affects them but also their children.