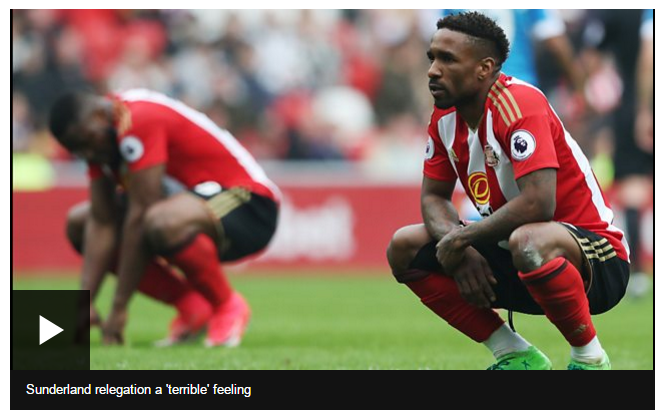 Sunderland’s 10-year stay in the Premier League ended as Bournemouth scored a late winner at the Stadium of Light.

The result coupled with Hull City’s draw at Southampton means David Moyes’ side are 14 points from safety with four games left.

The defeat, Sunderland’s 23rd of the season, means the Black Cats are relegated from the Premier League for a joint-record fourth time in Moyes’ first season in charge.

The Norwegian also came close in the 20th minute but his shot rebounded off the post and crossbar and into the arms of Jordan Pickford.

Artur Boruc saved from Jermain Defoe in the first half, and Fabio Borini and George Honeyman in the second, but the Black Cats failed to sustain any real pressure on the Bournemouth goal.

A run of remarkable survivals comes to an end

Sunderland needed to at least match Hull’s result against Southampton to survive another week and were doing so – despite another lacklustre performance – until the 88th minute.

Southampton won a penalty at St Mary’s in the closing stages which, if converted, would have seen Sunderland survive for now but Eldin Jakupovic saved from Dusan Tadic.

Seconds earlier, Moyes’ side had been hit on the counter for the winning goal with Fraser sprinting clear before finding the in-form King who made no mistake, scoring his 12th goal of 2017, BBC reports.