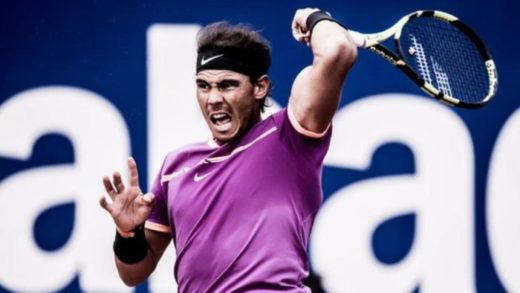 The Spaniard – who became the first man in the Open era to win the same event 10 times at last week’s Monte Carlo Masters – did not drop a set this week.

Nadal, 30, has now won 10 consecutive matches and is aiming for his 10th French Open title next month.

‘Anything could have happened’

The former world number one played all of his matches on the renamed Rafa Nadal court at the Real Tennis Club, and needed just 90 minutes to finish off Thiem.

World number nine Thiem beat world number one Andy Murray in the semi-finals and claimed the first break point of the contest.

However, Nadal broke serve in the 10th game and claimed the first set, before breaking twice in a row in the second to clinch the title on his favourite clay surface.

He was only broken twice in his 47 service games throughout the week.

“It was a close first set and a good quality of tennis – anything could have happened,” said Nadal.

“But then I started playing at a very high level and Dominic probably started making a few more mistakes.”

Bedene, 27, was ranked outside the top 100 at the beginning of March but has climbed to world number 68 and will move higher still on Monday.

But his unbeaten run was finally ended as Pouille won in just 64 minutes.

“I’m a little disappointed because I had problems with my finger and felt uncomfortable hitting my shots,” Bedene said.

“I wasn’t close to the level I should be at to beat Lucas, but he was playing really well. It was like everything went in for him.”