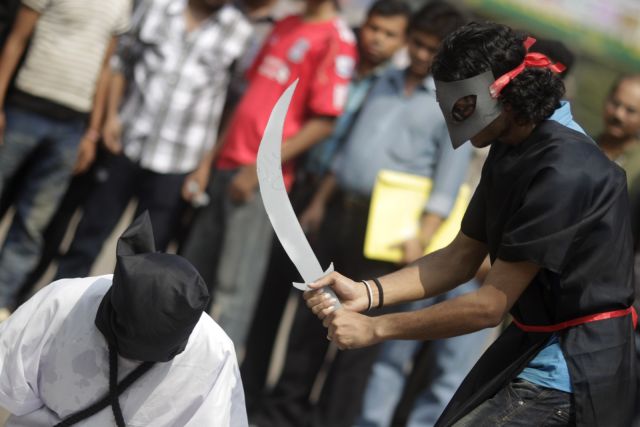 Illustrative image of an execution.

A Saudi Arabian man who renounced Islam and made disparaging remarks about the prophet Muhammad has been sentenced to death.

Authorities became aware of Ahmad Al-Shamri in 2014 after he uploaded a series of videos reflecting his views on social media. He was subsequently arrested on charges of atheism and blasphemy, faced trial and was sentenced to death in February 2015.

Al-Shamri is reportedly in his early 20s and comes from the city of Hafar Al-Batin, located in Saudi Arabia’s Eastern Province.

The defendant initially pleaded insanity, saying that he was under the influence of drugs and alcohol when he made the comments, Hala Dosari, an advisory board member of Human Rights Watch (HRW) told the Washington Post.

She added that “his trial focused heavily on Quranic law and little on any mitigating mental illness. As a result, Al-Shamri has been sentenced to death for being an atheist.”

According to Amnesty International, the Gulf oil giant carried out at least 154 executions in 2016. The country has been habitually criticised by human rights groups over its human rights record, but it is still a member of the UN’s Human Rights Council. Its term expires in 2019.

Leaving Islam is punishable by death in the ultra-conservative kingdom.

“Judges come from religious seminaries in Saudi Arabia. They see themselves as preservers of Saudi Arabia’s character as an Islamic state,” he added. “And they come down hard on people who step out of line.”

Saudi Arabia was ranked third by Amnesty International for recorded executions in 2016 behind China (which was in the thousands) and Iran (567+). The true figures are thought to be significantly higher as the figures only cover the judicial use of the death penalty.

Those sentenced to death are killed by beheading or shooting.

Social media users were divided over Al-Shamri’s death sentence, with some saying such an extreme course of action is unjustified. Others, however, appeared to celebrate the verdict and even went as far as saying they wished “there could be live streaming” when the execution is carried out.