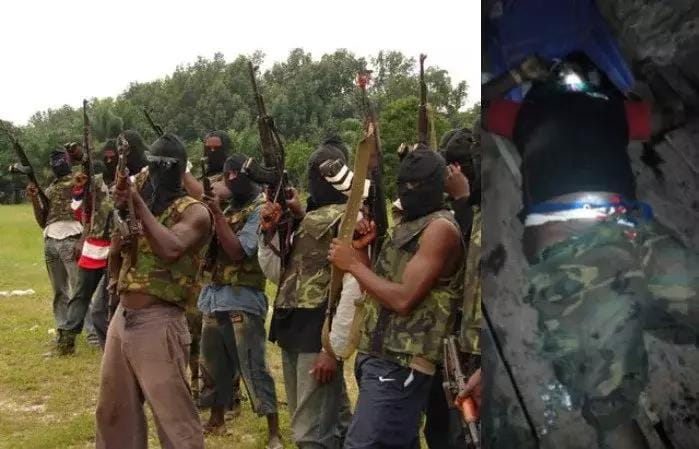 Late Ossy Ibori and members of his criminal gang

The Joint Military Task Force deployed to the Niger Delta said on Monday that its troops had killed a suspected militant leader in a shoot-out with the bandits in Ondo state.

Spokesman of the Joint Task Force, Maj. Abubakar Abudullahi, who disclosed this in a statement issued in Yenagoa, said that a soldier was killed and three others injured during the shoot-out on Sunday night.

He said that the JTF remained committed to its mandate of securing oil facilities and checking criminality and maintaining peace in the Niger Delta region.

“Troops of Operation DELTA SAFE in a special operation repelled an attack on troops’ location around Ajakpa community, in the creeks of southern Ondo state on Sunday night.

“The attack was led by one notorious gang leader, Ossy Ibori with a hideout at Ajakpa in Ese-Odo Local Government Area of Ondo State.

“The leader was gunned down during the gun duel, along with some of his gang members.

“His body was identified by the locals in the area. While search for other criminals, who jumped into the water with gunshot wounds is ongoing, troops had recovered one AK-47 rifle and 4 magazines.

“Sadly in the process, one gallant soldier paid the supreme price while three others sustained gunshot wounds.

“They have since been evacuated to military hospital for proper medical attention,” Abdullahi stated,“ he said.

He explained that the operation was still ongoing and appealed to law abiding residents in the affected communities to remain calm and vigilant.

The spokesman urged the people to support troops with valuable information on the whereabouts of other criminals.

Abdullahi said that criminal gangs led by late Ibori have been terrorising parts of Lagos, Ogun, and Ondo states prior to the operation.

He alleged that they committed many atrocities by threatening the peace and security of the area.

Meanwhile, The Commissioner of Police in Lagos, Mr Fatai Owoseni, confirmed the killing to newsmen on Monday, while identifying the suspect as “OC’’.

Owoseni said the incident was part of efforts to apprehend members of the gang and other criminals that had made living miserable for Nigerians.

He said that the gang retreated back to their base in Ijapa in Ondo state because they could no longer lay claim to the creeks in Isawo area, Ikorodu.

A very reliable source revealed that the deceased was lured out of the creeks, where he was hiding with others by his girlfriend.

“Unknown to him that the military operatives had been monitoring their movement and activities. As soon as he came out to meet his girlfriend, the soldiers were around him.

“As he try to escape, he was gunned down,” the source said.