Buhari Will Complete His Tenure In 2019 – Clergyman 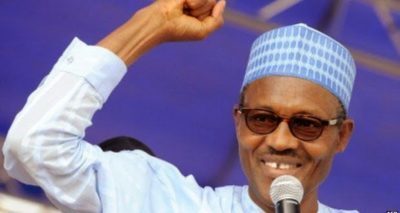 A clergyman, Obinna Omerie, has declared that President Muhammadu Buhari will successfully pilot the affairs of the country till 2019 in good health.

Omerie, the founder of Grace and Great Kings Christian Ministry, Egbu, Owerri North Local Government Area of Imo, made the declaration while addressing journalists in Owerri on Saturday.

‘‘God revealed to me as His prophet that Buhari will complete his tenure in 2019,’’he said.

He said that those expressing concern over President Buhari’s health are spiritually blindfolded and speaking from revelations backed by satanic sources.

The man of God also said that the economic recession in the country was divinely motivated, saying ‘‘Nigeria’s economy will emerge stronger at the end of the recession.

“For children of God this economy is not so much felt now.

‘‘The situation is fast opening prosperity doors for some cities like Owerri, Port Harcourt, Lagos, and Calabar, because things are positively changing in these cities now.’’

The clergyman derided those predicting that the 2019 elections would not be peaceful, noting that ‘‘those saying the election will be bloody are wrong.

‘‘For me, the Lord has not shown me any blood, the election will be peaceful as usual irrespective of all the doomsday prophecies from some altars and pulpits.’’

Omerie asserted that Nigeria is a nation loved and blessed by God.

He said no evil would befall the nation before, during and after the next general elections in 2019.

He noted that pockets of crisis recorded across the country, according to him, were caused by evil men challenging the supremacy of God.

On the impact of fake prophecy, the man of God observed that the activities of fake religious ministers had created some discords and crises in many families.

He, therefore, appealed to the government and church leaders to evolve means of curtailing the activities of doomsday clerics.

Omeire, popularly called `Authority,’ noted that people who seek solutions to their problems sometimes play into the hands of fake pastors by carelessly disclosing their problems during counseling, which such fake take advantage of.

‘‘People meeting men of God should stop giving `expo’ to these ministers; allow God to reveal things worrying you to the man of God, that is the way God works,’’ he said.