Rescued Chibok Girls: This is a pleasant 2nd anniversary gift to Nigerians – Buhari 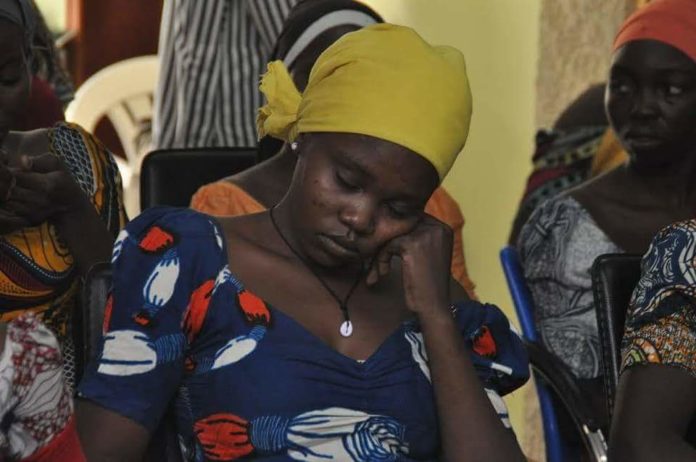 One of the girls

President Muhammadu Buhari has described the rescue of 82 Chibok schoolgirls as a pleasant 2nd anniversary gift to Nigerians.

The President made this known in Abuja on Sunday at a reception organised in honour of the rescued girls who were brought to Abuja after their release on Saturday.

The All Progressives Congress-led Federal Government will be celebrating its 2nd anniversary on May 29.

President Buhari expressed delight over the release of the girls and reassured Nigerians, especially relatives and friends of the determination of his administration to secure freedom for the remaining girls and other Nigerians still under the insurgents captivity.

“I cannot express in a few words how happy I am to welcome our dear girls back to freedom.

“On behalf of all Nigerians, I will like to share my joy with you, your parents, your relatives, friends and the Government of Borno State on regaining your freedom.

“The Federal Government will like to commend the Security Agencies, the Red Cross, local authorities, local and foreign NGOs and all those who contributed in one way or another to secure the release of our Chibok Girls.

“Let me reassure Nigerians, especially relatives and friends of the remaining girls that the Federal Government will spare no effort to see that they and all other Nigerians who have been abducted safely regain their freedom.’’

He said the Presidency would personally supervise the performance of those entrusted with their welfare and commitments made by the Federal Government on their health, education, security and general well-being.

He said: “No human being should go through this kind of ordeal.’’

The President directed security agencies and state governments to continue to provide special protection to educational institutions vulnerable to this kind of outrage especially in remote areas.

According to him, the Federal Government is resolutely determined to safeguard the security of all Nigerians at all times.

President Buhari congratulated the rescued girls and their parents on their safe return.

It would be recalled that a total of 276 girls were abducted from Government Girls Secondary School Chibok, in Borno on April 14, 2014 while preparing to sit for their final exams.

The latest development brings the total of number of girls so far rescued by the Federal Government to 105.

In Oct. 2016, 21 of the girls were freed by Boko Haram after negotiations between the group and the Nigerian government brokered by the International Committee of the Red Cross and the Swiss government.

The reception was attended by ministers, service chiefs and other government officials.