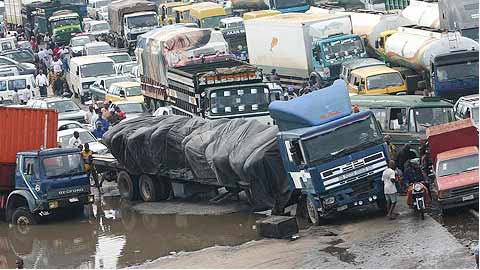 The Managing Director of NPA, Ms Hadiza Usman, told a stakeholders’ meeting in Lagos on Monday that NPA would provide N1.8 billion while Dangote Group and Flour Mills would provide N2.5 billion.

The NPA convened the stakeholders’ meeting to bring back operators who withdrew their services from the port.

“We have received a proposal for Corporate Social Responsibility of N2.5 billion from Dangote Group and Flour Mills for the full reconstruction of port roads.

“The reconstruction entails full drainage service and the total cost of the Apapa port access roads project is N4.3 billion.

“The two entities are willing to provide N2.5 billion, while NPA will pay the remaining N1.8 billion to ensure that the roads are done,” Usman said.

The NPA boss said that the reconstruction would begin within one month, adding that she would ensure speedy completion of the project.

She said that the Federal Ministry of Works would request the approval of Federal Executive Council to obtain the necessary approvals for NPA to embark on the project.

Usman said NPA has asked the Federal Ministry of Works to provide the final engineering design and costing to enable it embark on the reconstruction of the Creek road and Liverpool road later this year.

“I feel concerned about the deplorable state of these roads and I communicated at a meeting with the minister that we are willing to fund these roads irrespective of which agency of government is doing it, she said.

Usman said that the management of NPA would make provision for an annual budget for the reconstruction of the roads.

She urged the Federal Ministry of Works to urgently complete the reconstruction of Coconut/Mile 2 road in Lagos.

Usman said that NPA would seek permission of the Federal Ministry of Works to complete the holding bay under the Public Private Partnership arrangement.

According to the NPA boss, the congestion around Apapa and Tin-Can Island ports was due to lack of an effective holding bay, trailer parks and non-reconstruction of ports roads in Lagos.

Usman commended the Executive Secretary of the Nigerian Shippers’ Council (NSC), Mr Hassan Bello, for dialoguing with port operators who had protested poor infrastructure at the port.

He pleaded with the port operators to suspend the withdrawal of their services and await the outcome of the initiatives of the NPA management.

Soji-George said that security agencies should be committed to their duties by ensuring the free flow of traffic to reduce the time of doing business at the ports.