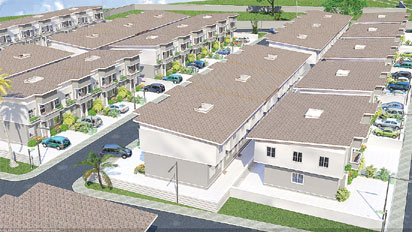 The Executive Chairman of the firm, Dr Muhammadu Indimi, disclosed this on Tuesday during the ground breaking ceremony of the housing estate in Enwang.

He said that the Oriental village was a clear manifestation of the company’s commitment to sustainable development of its host community.

“”The housing initiative we have started will leverage innovative housing technology to provide accommodation to 100 families in Mbo Local Government Area.

“”There will be 100 units of one bedroom flats which will sit on 2.5 hectares of land graciously provided by the good people of Mbo,” Indimi said.

He assured the people of Akwa Ibom that his company was dedicated to social inclusion and its approach was to grow alongside its host communities.

Indimi lauded what he called the tremendous support and cooperation received by the company from Akwa Ibom Government and the people of the state since its establishment in 1990.

In his keynote address, Gov Udom Emmanuel of Akwa Ibom commended the company for a well laid thought out social corporate responsibility project embarked upon by the organisation.

Emmanuel, who was represented by the Speaker, Akwa Ibom House of Assembly, Mr Onofiok Luke, urged the company to relocate its headquarters to its operational base.

He said that government would continue to partner the company to enhance community development.

“”My government and people have followed with keen interest, the exploit of Oriental Energy Resources Ltd in the Nigerian petroleum sector.

“”The ground breaking ceremony of the Oriental village is one of such spectacular achievement,” Emmanuel said.

In his remarks, the Paramount Ruler of Mbo, Edet Isemin, said the Oriental village opened a new page in the history of Mbo.

He described the gesture as a clear indication of commitment of the company to develop its host community.

He said: “”We cannot dispute the fact that shelter, education and good health are sine-qua-non to any meaningful life.”