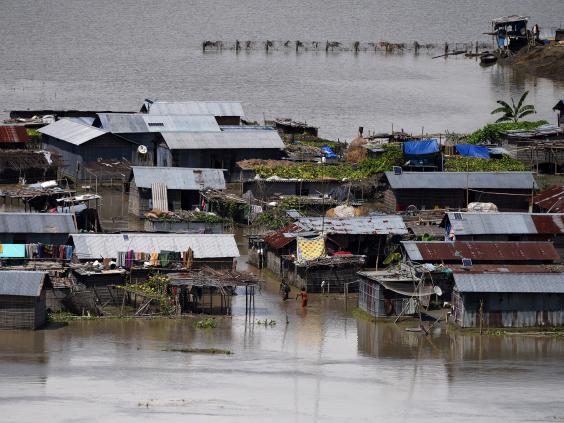 Partially submerged houses are seen at a flood-affected village in Morigaon district in the northeastern state of Assam, India. (REUTERS/Anuwar Hazarika)

At least 1,200 people have been killed and millions have been left homeless following devastating floods that have hit India, Bangladesh and Nepal, in one of the worst flooding disasters to have affected the region in years.

International aid agencies said thousands of villages have been cut off by flooding with people being deprived of food and clean water for days.

South Asia suffers from frequent flooding during the monsoon season, which lasts from June to September, but authorities have said this year’s floods have been much worse.

In the eastern Indian state of Bihar, the death toll has risen to more than 500, the Straits Times reported, quoting disaster management officials.

The paper said the ongoing floods had so far affected 17 mllion people in India, with thousands sheltered in relief camps.

Anirudh Kumar, a disaster management official in Patna, the capital of Bihar, a poor state known for its mass migration from rural areas to cities, said this year’s farming had collapsed because of the floods, which will lead to a further rise in unemployment in the region.

In the northern state of Uttar Pradresh, reports said more than 100 people had died and 2.5 million have been affected.

In Mumbai, authorities struggled to evacuate people living in the financial capital’s low-lying areas as transport links were paralysed and downpours led to water rising up to five feet in some parts of the city.

Weather officials are forecasting heavy rains to continue over the next 24 hours and have urged people to stay indoors.

In neighbouring Bangladesh, at least 134 have died in monsoon flooding which is believed to have submerged at least a third of the country.

More than 600,000 hectares of farmland have been partially damaged and in excess of 10,000 hectares have been completely washed away, according to the disaster minister.

Bangladesh’s economy is dependent on farming and the country lost around a million tonnes of rice in flash floods in April.

“Farmers are left with nothing, not event with clean drinking water,” said Matthew Marek, the head of disaster response in Bangladesh for the International Federation of Red Cross and Red Crescent.

In Nepal, 150 people have been killed and 90,000 homes have been destroyed in what the UN has called the worst flooding incident in the country in a decade.

The disaster comes as headlines have focused on the floods in Houston, Texas, which authorities have described as “unprecedented”.

Officials in Texas have said the death toll now stands at 15 in the wake of Hurricane and Tropical Storm Harvey, with thousands forced to flee their homes.

The rise in extreme weather events such as hurricanes and floods have been identified by climate scientists as the hallmark of man-made climate change.

The US has seen two of its worst storms ever, Hurricane Harvey and Hurricane Katrina, in just over a decade.