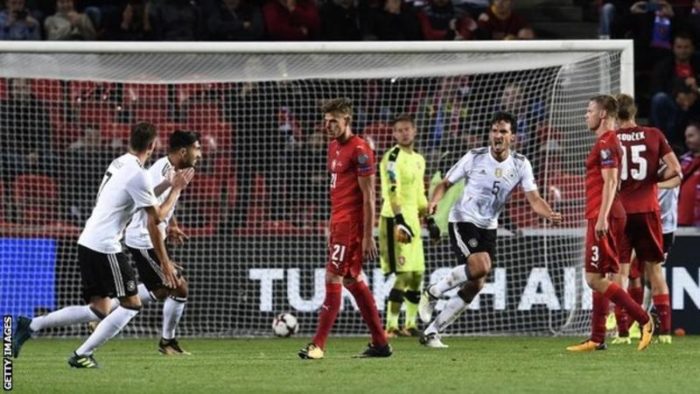 Germany scored one of their goals
Photo: BBC/Getty Image

Mats Hummels scored a late winner as Germany beat the Czech Republic to boost their – and Northern Ireland’s – chances of reaching the World Cup.

The Germans, who have won all seven games, are five points above Northern Ireland with three games to go in Group C.

Hummels headed home in the 88th minute to win the game.

As a result of that goal, Northern Ireland – who won 3-0 in San Marino – only need to draw against the Czechs on Monday to seal second place. Of the nine group runners-up, the eight teams with the best records will enter the play-offs.

BBC Sports reports that defending champions Germany can qualify for Russia if they beat Norway, and Michael O’Neill’s side do not win.

Norway beat Azerbaijan 2-0, but both sides are effectively eliminated, sitting nine points behind NI and with much worse goal differences.