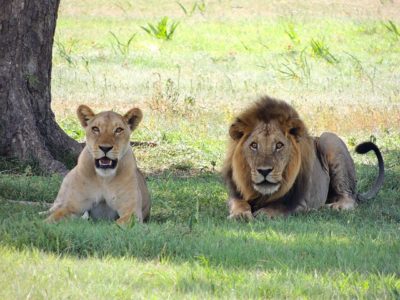 The Gauteng Province chapter of Nigeria Union on Monday urged Nigerians living in the area to adopt safety measures following the escape of five lions in the area.

Warrant Officer Jan Esterhuysen, the Rural Safety Coordinator of Fochville in Western Johannesburg, said the lions escaped from an unknown sanctuary on Saturday.

“We responded to a distress call and were surprised to see a pride of five lions in a farm at Fochville busy feeding.

“We identified a large male and four smaller lions. Tracking them at night was difficult,” he said.

Esterhuysen said nature conservation and other role players were converging on the area to assess the situation.

Mr Trust Owoyele, the Vice Chairman of the union in the province, disclosed in Johannesburg, South Africa, that the body had received information about the missing lions.

“We have a sizeable Nigerian population in the area.

“We advise that for now, they should stay away from farms, parks and bush because the predators could be hiding there.

“We also call on our people to be cautious of their movements in the night, especially in lonely areas because the lions have been sighted feeding on a cow in a farm,” he said.

Owoyele said that though authorities were working hard to get the lions, it was important that Nigerians in the area adopt safety measures.

Mr Emeka Ezinteje, Secretary General of the union, said that the national secretariat was aware of the development in the area.

He also urged Nigerians to be conscious of the missing lions and be cautious in their movements.

“The union appeals to relevant authorities to assist in capturing the missing animals as quickly as possible,” he said.

They were later spotted at a private farm near the park.