24.2 percent of Lagos women have sexual intercourse before age 18 – LASG 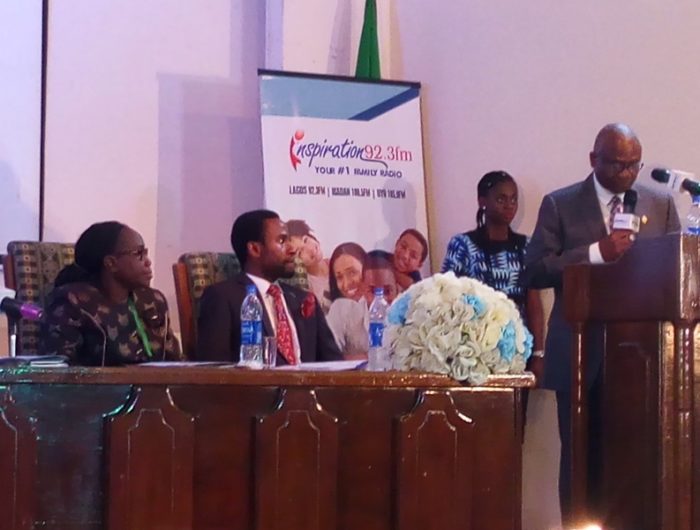 Dr. Jide Idris delivering a lecture at the event

Lagos State Government on Thursday disclosed that 24.2 percent of women in Lagos State have their first sexual intercourse before the age of 18 years.

Commissioner for Health, Dr. Jide Idris disclosed this while delivering a lecture  at the first Lecture and Award Series, 2017 of the Inspiration 92.3fm  held at the Nigerian Institute of International Affairs, NIIA, Victoria Island, Lagos, Southwest Nigeria.

Idris, who spoke on “Reproductive Health: Beyond Cultural Limitations and Concerns,” disclosed that the National Demographic and Health Survey  and the Multi-Indicator Cluster Survey reported that 24.2 percent of women in Lagos had their first sexual intercourse before attaining the age of 18 years.

“Nationally, the figures are about 51 percent. This implies that in Lagos, one out of every four women would have been exposed to sex before 18 and the national average for Nigeria is one of two women. The difference in these figures might be attributed to several factors, such as female education, urbanization, childhood marriages and so more.

“With an average age at first birth at 20 years, about 22.5 percent of pregnancies are by teenagers in Nigeria. More worrying, however, is that reports show that as at this year, about 40 percent of women in the Southwest have experienced physical violence since age 15 and sexual violence cannot be excluded from these statistics,” he stated.

“In other words, in a nation where more than 60 percent of its population are young people and significant numbers of these young people are exposed to sexual intercourse at an early age either voluntarily or violently, a lot of potential problems emerge. Such problems are associated with sexually transmitted infections, childhood pregnancy, trauma and its accompanying physical and mental health implications.

“This means that there must be access to knowledge about sexual health and systems that modify behaviours, as well as, access to services that prevent and manage them, Idris added.

Idris recommended that to improve on the reproductive health system, there must be education, increased investment in health, good governance, social and economic empowerment of women, strengthening health services, development of rights based code of ethics and domestication of international conventions.

Acting Director General, National Agency for Food and Drug Administration and Control (NAFDAC), Ademola Mogbojuri, who was represented by Mrs Bolaji Abayomi advised mothers to practice exclusive breastfeeding in the first six months of giving birth and continued to breastfeed their babies for three years with the addition of supplements in order to make for health living of the child.

Chairman of the occasion, Femi Gbadebo said for proper reproductive healthcare, the issues of anti-natal, mother and child care, among others must be addressed, adding that “we need to educate ourselves on what needs to be done.”

In his remarks, the Chairman of Amazing Inspiration Media, Mr. Erastus Akingbola said the decision to hold the lecture was borne out of the need to contribute to the issue of healthy living among the people.

Represented by Mr. Soni Irabor, Akingbola ‎said the best approach to solving issues around Reproductive health is when there is a forum for people to break the silence on it for q common solution.

He also disclosed that since the radio station has a passion for every segment of the society there was every need to accord priority to the well being of the citizens by providing swift and genuine information on how to address their health challenges.