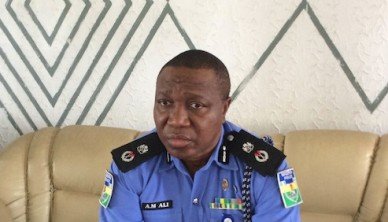 Members of the Police Community Relations Committee (PCRC) in Ogun State have dissociated themselves from the viral #ENDSARS campaign in the social media.

To this end, they staged a protest in Abeokuta on Friday, calling on the authorities to discountenance the campaign but instead restructure the reorganisation.

Alhaji Ibraheem Olaniyan, the PCRC Chairman in the state made the position of members known during the protest thus: “We cannot claim that our police officers are saints and without blemish, being products of our large society. We, nevertheless, take exception to the ongoing call for the total scrapping of this specialized crime fighting organ of the Nigeria Police Force.

“Our experience in Ogun State in the past two years under the current Commissioner of Police Ahmed Iliyasu and his team of FSARS led by DSP Uba Adams has shown us that with the right strategy and cooperation there can be a near perfect relationship between the Nigeria Police and the general public, a feat hitherto thought unthinkable.

”Therefore, we the PCRC of Ogun State wants to categorically dissociate ourselves from the on going #ENDSARS campaign, as well as pass a vote of absolute confidence in the current police management team and the entire leadership of the federal special anti-robbery squad in Ogun State”.

Alhaji Olaniyan also commended the Inspector-General of Police Ibrahim Kpotum Idris on the restructuring of the FSARS. He described the move as welcomed.

Olaniyan urged the IGP to use his good office to give the necessary waiver to keep DSP Uba Adams at the headship of Ogun State FSARS.

“Though DSP Uba is young but a very resourceful police officer who has shown gallantry and exemplary leadership in the conduct of the affairs of the FSARS in Ogun State under the direction of the Commissioner of Police Ahmed Iliyasu. This has led to the state not having a single case of unresolved kidnapping and there has never be any case of bank robbery in the last two years,” Olaniyan stated.

The Ogun PCRC boss also commended the IGP for his good work in securing the country.

“The Inspector General of Police has been doing wonderfully well in securing our dear country and we want to salute his courage and wish to thank him immensely for the type of officers currently deployed to our state as well as the support given to them and the state PCRC. We are very grateful and remains committed to his visions and policies that will give us a brand new police and a safer country,” he said.

“The PCRC is an integral part of the Nigeria Police, working in tandem with the spirit and letters of the IGP in community policing to ensure a crime free society,” he added.

Ogun State has over 35,000 PCRC members in the last two years and this has greatly resulted in more community participation in police matters.

Also over 10 community sponsored police stations are under construction in all the existing five area commands in Ogun State.