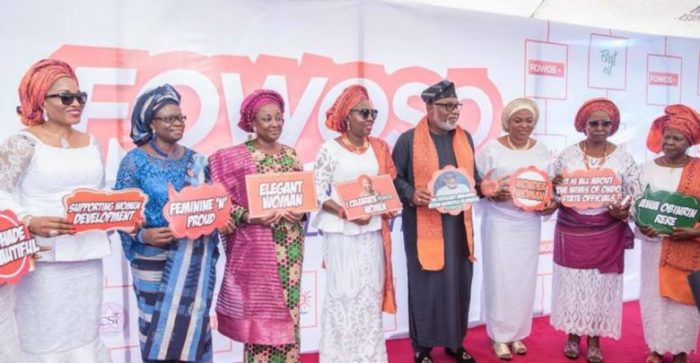 Wife of the Governor of Ondo State, Betty Anyanwu -Akeredolu officially launched her initiative, Forum for Wives of Ondo State Officials (FOWOSO) at a colourful event which witnessed display of cultures from across the 18 Local Government Areas of the State.

The epoch making event drew governors and politicians across the country such as Governor of Kogi State, Alhaji Yahaya Bello as the Chairman of the occasion; Governor of Ondo State, Oluwarotimi Akeredolu; the wife of Edo State Governor, Mrs. Betsy Obaseki; the wife of Ondo State Deputy Governor, Mrs. Ajewole Agboola Ajayi, wives of past Governors in the state, royal fathers, among other leaders in the state.

Addressing the gathering at the M.K.O Democracy Park in Akure, the initiator, Mrs. Akeredolu highlighted some of the objectives of FOWOSO, noting that it would help in developing and executing programmes that would build capacity in young and old women in the state.

She explained that FOWOSO would stand for and create equal opportunity for women of the state so as to prepare them to take charge when called upon, while stressing the need to urgently address low representation of women in position of real authority and decision-making.

Mrs. Akeredolu noted that women’s roles had grown to the point where it is a loss to the society to segregate them from economic activity and decision-making processes.

She also expressed optimism that FOWOSO would become a lasting legacy that would continue to carry out projects aimed at empowering, establishing and encouraging girls and women to be more in the society even after she leaves office.

“We as women are capable of leaving lasting legacy in the annals of time of this great sunshine state and the nation at large. We believe that FOWOSO can be one of such legacies, not mine but of all women in this state. We believe that FOWOSO will be here for a long time, even after I leave, providing unity amongst women in the state to carry out projects aimed at empowering, establishing and encouraging girls and women to be more and do more”, she added.

The chairman of the occasion, Bello commended the Ondo State people, saying that the Akeredolu led government is known for running its government on the principle of good governance.

Bello who was represented by Mrs Folashade Arike Ayoade, the Secretary to Kogi State Government urged members of FOWOSO to pay attention to issues that affects women and girl child as they had way of influencing men, noting that once the heart of the female constituency is captured, it will go a long way in bridging the gap between the government and the governed.

Earlier, the governor, Akeredolu called for supports from members of FOWOSO while also expressing confidence that the forum would accomplish the purpose for which it was established.