Reuters journalists in Myanmar remanded for another 14 days 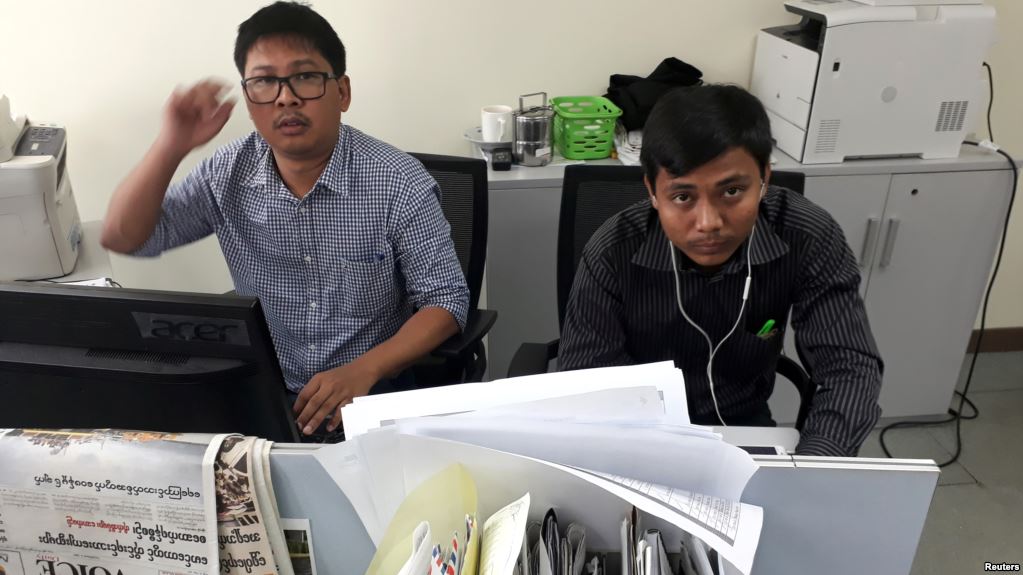 Reuters journalists Wa Lone, left, and Kyaw Soe Oo, who are based in Myanmar, pose for a picture at the Reuters office in Yangon, Myanmar, Dec. 11, 2017.

Two Reuters journalists who have been detained in Myanmar for the past two weeks were remanded in custody for 14 days on Wednesday as a probe into allegations they breached the nation’s Official Secrets Act continues, according to their lawyer.

When they appeared in court for the proceedings, Wa Lone, 31, and Kyaw Soe Oo, 27, were allowed to meet their families and their lawyer for the first time since their arrest on the night of Dec. 12.

The two journalists said they had not been mistreated in custody.

“The situation is okay,” Wa Lone said after the hearing, adding that the two were being held at a police compound in Yangon.

“We will face it the best we can because we have never done anything wrong,” he said.

“We have never violated the media law nor ethics. We will continue to do our best.”

Dozens of reporters and cameramen were outside the courthouse in a northern district of Yangon for the appearance of the two journalists.

They were brought in a white van, rather than a police truck, dressed in casual clothes and were not handcuffed.

Their lawyer, Than Zaw Aung, who has been retained by Reuters, said the two had only been doing their job as journalists.

“They are being accused under this charge while doing their work as media,” he told reporters.

Only their families and lawyer were allowed into the courtroom along with police and government lawyers.

The two journalists had worked on Reuters coverage of a crisis in the western state of Rakhine, where an estimated 655,000 Rohingya Muslims have fled from a fierce military crackdown on militants.

The two journalists are being investigated under a section of the Official Secrets Act which carries a maximum prison sentence of 14 years.