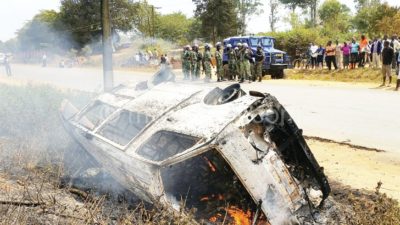 The FRSC Sector Commander in the state, Mr Sunday Ajayi, told the News Agency of Nigeria (NAN) in a telephone interview on Friday that three vehicles were involved in the accident.

He added that the accident claimed one person, while three others sustained injuries, noting that the remains of the deceased had been deposited in mortuary.

He said that the injured had been taken to a nearby hospital for medical attention, saying FRSC officials were on ground to remove obstructions from the accident scene.

An eyewitness at the scene of the accident said it occurred at about 10 a.m. on Friday.

The source said the accident was caused by break failure of an articulated vehicle conveying drinks and heading toward Onitsha.

“The trailer lost control and hit two vehicles and a bus which was picking passengers at the junction,” the source added.