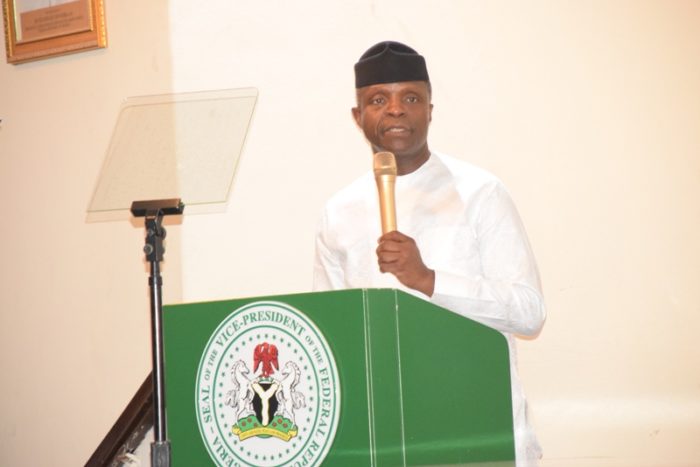 Vice President Yemi Osinbajo has reiterated the government’s responsibility, through the armed forces, to defend the territorial integrity of the country.

In his remarks at the 2018 Armed Forces and Remembrance Day Service in Abuja, Osinbajo also said the government had the burden to defend the peoples’ rights of existence, religion and other human rights.

He, however, noted that some of the rights had in recent times, been challenged by the criminal group Boko Haram, which had killed and maimed innocent people including women and children.

According to him, the Armed Forces of the country have lost personnel in various battles to keep the country together, leaving behind widows and children who the populace should cater for.

The Vice President noted that the country had experienced various attacks and killings in various communities and noted that President Muhammadu Buhari had directed the security agencies to deal with those involved.

He said that the tension in the country was further fueled by the politicisation of many issues and cautioned that politics should not be allowed to add to the existing problems of the country.

“We (government) have sworn to defend the poor and the helpless; the Armed Forces represent the bastion of the country’s unity.

“Our nation today stands as one to honour the fallen heroes,’’ Osinbajo declared.

The Vice President added that as Christians, those who attended the service should live according to the demands of their faith to preach the gospel of Christ not only in words but in action.

According to him, the gospel preaches sacrifice, repaying evil with good, avoiding vengeance and also reminds the faithful that no battle is theirs and that vengeance belongs to God.

“We have to preach the gospel of self-sacrifice that has changed the world, the sacrificial love that the Lord has shown by shedding His blood to save humanity,’’ Osinbajo stated.

“We must work together as Nigerians to build a prosperous and united nation,’’ he said.

In a sermon, an Anglican Archbishop of the Jos Province, The Most Rev. Benjamin Kwashi, noted that the service was more important for civilians than members of the armed forces, expressing the need for more civilians to attend such service.

The cleric stated that the Armed Forces remained “the one institution of hope for Nigerians.

“They are serving and laying their lives against Boko Haram, marauding herdsmen and men who have not wished this country well’’.

The Archbishop noted that a lot of innocent blood had been shed in the country and expressed worry that in spite of the killings, nothing serious was done to apprehend the killers and prosecute them.

“When I look at people killed, I wonder how leaders sleep,’’ he said, adding that in Jos he had conducted more funeral services than weddings.

Kwashi highlighted the important role of the military in national unity but expressed dismay that many of the members retired to beg for means of livelihood.

“The institution of Armed Forces still gives us hope and I pray that those who look after their pensions will do so in the name of God,’’ he said.

He added that even if there should be restructuring in the country, the nation must be kept together.

The clergyman said that Jesus served humanity by doing good to the people, providing their needs and solving problems.

Accordingly, he said the country needed those who can sacrifice for the next generation by denying themselves of comfort.

He advised the people and those in authority to urgently address the plight of the poor as well as for the National Assembly to appropriate enough resources to cater to the needs of the people who make sacrifices for the country’s unity.

Kwashi said that the country was tired of problems and needed sacrifices at the moment.

“You have no business to seek to rule the country in any capacity if you cannot find solutions to problems of the people,’’ he contended.

The service was attended by serving and retired government functionaries, members of the armed forces, Nigerian Legion, para-military, ministers, members of the national assembly and the diplomatic corps.