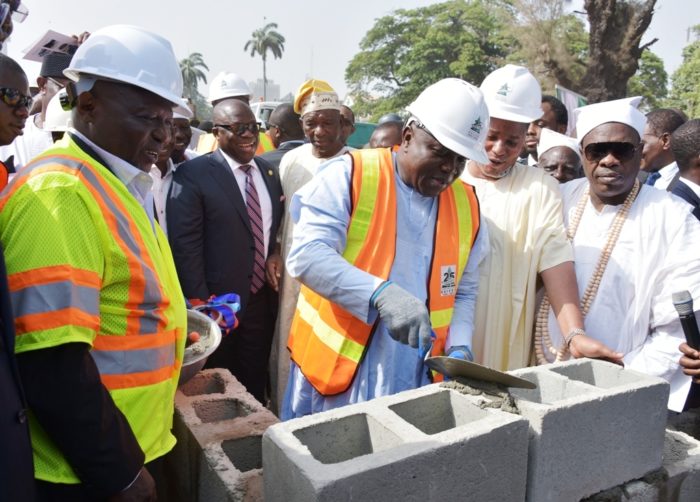 Lagos State Governor, Mr. Akinwunmi Ambode on Tuesday said his administration was making strategic efforts to transform Onikan-Marina axis to a world class tourism hub that would go a long way to restore the lost glory of Lagos Island.

The Governor, who spoke at the foundation laying ceremony of the J.K Randle Centre for Yoruba Culture and History in Onikan, Lagos, said the Centre was part of a grand plan by his administration to turn the Onikan axis into a critical tourist hub, not just in the country but in the continent.

He said the Centre, originally built in 1928, was one of the centres that provided avenues for recreation and entertainment, but that the State Government has embarked on projects to regenerate, redesign and reactivate special cultural and tourist infrastructure in the State and convert them to centres of recreation, tourism and entertainment.

“In recent times, the centre has become redundant serving uses other than those for which it was built before falling to great neglect and disrepair. As a result, the Lagos State Government decided to redevelop the Centre and we are here for the ground-breaking ceremony of the new J. K. Randle Centre for Yoruba Culture and History. In the past, the Centre provided recreational services to the Lagos populace but the new J. K. Randle Centre will do a lot more,” the Governor said.

According to him, the new Centre, among other things, consists of an Exhibition Centre, a Library, a Multi-Purpose Hall, Learning Spaces, Restaurant and Lounges, while the Centre will also retain its swimming pool and sports facilities as well as a pavilion for stage performances.

Besides, the Governor listed the ongoing upgrading of the Onikan Stadium to a standard sports arena, regeneration of CMS Marina and Multi-Layer Car Parks around Onikan as other developments coming to the Onikan-Marina axis.

“All these will serve as a catalyst for the rest of the regeneration of Lagos Island, restoring it to its former glory, while reinforcing the position of Lagos State as one of the world’s most vibrant, cosmopolitan and exciting places to experience,” he said.

While noting that the State Government decided to retain the name J. K. Randle in recognition of the exploits of the late Lagos socialite, Governor Ambode thanked the present Board of Trustees comprising Chief Femi Majekodunmi, Mr. Femi Adeniyi-Williams and Bashorun J. K. Randle for their support and cooperation towards the redevelopment initiative.

In his goodwill message, one of the members of the Board of Trustees of the Centre, Dr Femi Majekodunmi, thanked Governor Ambode for redevelopment of J.K. Randle Centre as envisioned by the late J.K Randle, who was a close friend of his father.

“There are two performing two Governors that I know that have made up of their pledge, you are one of them, the other, I’ll keep the other 35 guessing”, Majekodunmi said.

He recalled his time as a resident in Lagos Island and had his primary and secondary education within the area, saying that he would pass the Centre every morning on his way to school and back.

“Every day, I walk pass there and in the afternoon, I swim over there. We use to know how it was then till the time it was demolished.

“But after his death, his very good friends and committed Lagosians, which included my father, Dr M.A. Majekodunmi, Chief Alhaji I.S. Adewale and other trustees decided to immortalise this illustrious son of Lagos, J.K Randle. But with this what you have done, you have beat us to it,” Majekodunmi said.

“By providing ‘The Safety Arena’, we are not only institutionalizing inter-agency co-operation and collaboration but we are moving our emergency response mechanism to a new level with a more robust approach to emergency rescue through improved coordination and faster response time.

“Let me assure you that we are not only determined to institutionalize inter-agency collaboration but we are equally desirous of improving the inter-sectorial cooperation and synergy for Emergency Responders required for an effective Incident Management System,” the Governor said.

While charging management and staff to sustain the existing synergy among the various safety and emergency agencies, Governor Ambode urged them to desist from treating residents inhumanly, warning that professional misconduct would not be tolerated.

Meanwhile, speaking in Ikorodu where he commissioned the Lagos State Girls’ Junior Model College, Agunfoye, Igbogbo and newly constructed block of 20 classrooms with state-of-the-art facilities at Anglican Primary School, Isawo, Governor Ambode said the resolve of his administration was to make qualitative education available and accessible to every child of school age in the State.

The Governor, who was represented by his Deputy, Dr Idiat Adebule, said the opportunity being provided for children at the foundational stage with massive investment in education in the State, was crucial to the development of the country and as well designed to mould them into better individuals.

Governor Ambode said it was gratifying that the huge investment in education by his administration was already yielding positive results as evidenced by the improved students’ performance in examinations, national/international competitions, as well as improved morals and confidence in public speaking.

Besides, the Governor said the unveiling of the new Model College was another statement of his intention to take the education sector to a higher level and expand opportunities for girl child education.

The new college, which increased the number of Model Colleges in the State to 31, is equipped with 9 ultra-modern classrooms, library, laboratory, computer room, toilets and conducive offices for teachers, among others.