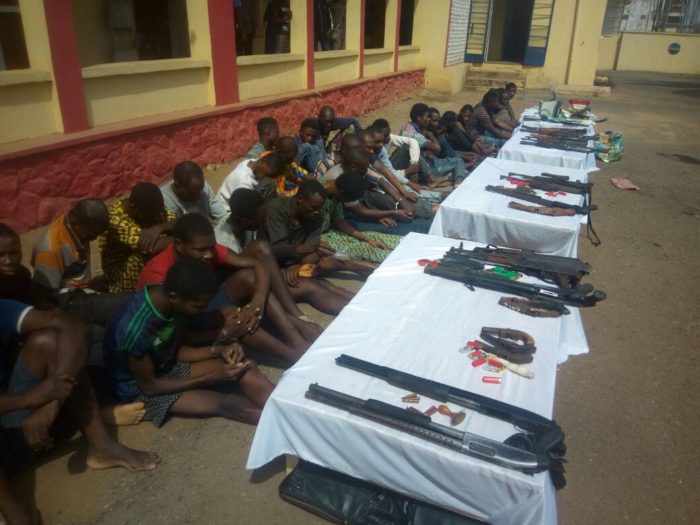 One of the suspects is Ayo Momodu, who referred to himself as a pastor in Abuja.

Ayo claimed to have been arrested based on a report by his girlfriend who gave him a car and wanted to collect the car back because they were no longer together.

Also among those paraded was one Taiwo Akindurodemi, 28, who allegedly killed his fiancee Shedrack Adetuke Lucia for money rituals.

Our correspondent gathered that Taiwo wanted to use Lucia for money rituals on the night she was supposed to travel out of Nigeria to Canada.

Taiwo told newsmen that he collected a ring from a clergy man who told him she would not die but will never remain the same. But the lady died.

Members of gangs who specialise in robbery, snatching of cars, motorcycle and cultism were also paraded.

Paraded with the suspects were teenage kidnappers and an Indian hemp dealer arrested with 114 bags of Indian hemp, Andrew Koku.

Andrew told newsmen that he killed his own child in his his mother’s presence because she refused to help him take care of the child when the mother of the child left.

He also made it known that he had been warned concerning marrying his wife but he refused, so when his wife left him he was left with no choice but to kill the baby by smashing the child with a cutlass.

TheMeanwhile the Commissioner of Police CP Ahmed Illiyasu in his press briefing promised to bring more criminals down as long at they will not stop committing crimes.

Also there is no room for any criminal in any corner of Ogun state. They will be trapped down. He said