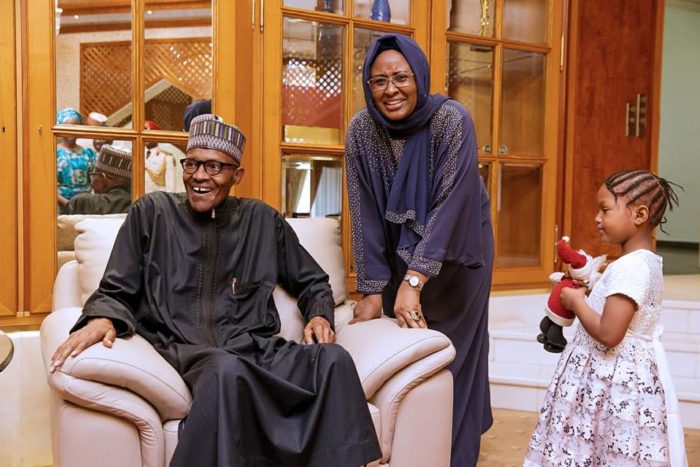 Buhari and his wife Aisha and their grand daughter

President Muhammadu Buhari has expressed appreciation to all men and women of goodwill for their prayers and best wishes which have now seen his son, Yusuf, being discharged from the hospital.

Mr Femi Adesina, the President’s Special Adviser on Media and Publicity, conveyed the president’s appreciation in a statement issued in Abuja on Friday.

The statement reads: “President Muhammadu Buhari, his wife, Aisha, and the entire family, thank all men and women of goodwill, both within and outside the country, for their prayers and best wishes, which have now seen their son, Yusuf, being discharged from hospital.

“The family appreciates the overwhelming show of love and solidarity which had come their way since Yusuf was involved in a motorcycle crash on Dec. 26, 2017.

“We thank Nigerians from all walks of life, both within and outside the country, leaders of many foreign countries, groups, organisations, individuals, and many others, who prayed, visited, sent messages, and generally stood by us at the trying time, praying that almighty Allah would reward them all.’’

Yusuf had been discharged from Cedarcrest Hospital, Abuja, on Friday following what the Chief Medical Director, Felix Ogedegbe, described as his “extremely speedy response to treatment.’’