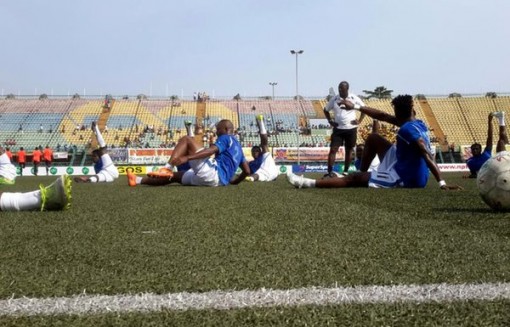 Felix Anyansi-Agwu, Chairman of Enyimba International Football Club, has charged the team to race out of the starting blocks as the 2017/2108 Nigeria Professional Football League (NPFL) season begins on Sunday.

A statement on the club’s official website indicated that Anyansi-Agwu made the call at a meeting with officials and players of the club on Friday at the team’s camp in Aba.

As part of preparations for the new season, the team had been involved in a closed camping exercise which spanned the entire Yuletide.

According to the statement, Anyansi-Agwu was effusive in his appreciation of the sacrifice made by the team.

“What you did is highly commendable. It’s not easy for you to have deprived yourselves of the feeling of Christmas. I know there is already a reward. Something has already been added to you.

“I watched, from a distance, your reactions, even on social media and I am strengthened by your discipline, commitment and professionalism. I seriously appreciate you, from the bottom of my heart,’’ he said.

Anyansi-Agwu laid out the club’s season targets, saying in spite of the absence of key players due to their involvement with the national team, Enyimba must hit the ground running.

“We are going to move on, in as much as we will miss them. We are also going to demonstrate that we have capacity. It’s an opportunity for others to prove themselves.

“We are hoping for them to do well, both for themselves and for the team. It is a huge statement, that we have five players (in the national team),” he said.

“What denied us last season was a slow start. From day one, we want to start posting results. We’ve done it before. In this club, we set records, and we break our own records.

“Let our work speak for us. The only way to show how hard we have worked is by getting results. In our history, we don’t stay out (of the title picture) for too long.

“At least every other year, we win trophies. That is why it must be a target, for this team to win this year,’’ he added.

Responding on behalf the players, the team’s Vice-Captain Ifeanyi Anaemena, expressed gratitude to the club’s chairman for his support and encouragement.

He agreed with him on the two-time African champions’ laid-out targets for the season.

“We are going to go out and do what we do best, to ensure that this season is a trophy season,” Anaemena was quoted as saying.

The “People’s Elephant’’ will open their league account on Sunday against Lobi Stars FC at Makurdi.