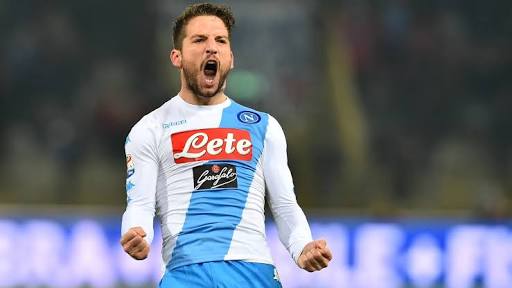 Napoli survived a tough test at Atalanta on Sunday as Dries Mertens’ second-half goal secured a 1-0 win which kept them top of Serie A.

Lazio scored five goals for the second league game in a row as they hammered Chievo 5-1 in spite of an injury to Serie A top-scorer Ciro Immobile.

Franck Kessie scored twice to give AC Milan a 2-1 win in windy conditions at Cagliari as both teams had a player sent off.

Napoli, who avenged their home Coppa Italia defeat by Atalanta earlier this month, lead with 54 points from 21 games.

They are four clear of Juventus who host Genoa on Monday with Lazio third on 43.

Inter Milan who have 42 points host AS Roma, who also have 39 points, in the late game.

“We’ve won a really difficult match against a team that always makes us suffer. I‘m very happy for us and our supporters.” Napoli coach Maurizio Sarri said. “This was a very valuable win.”

Mertens ran on to a through ball by Jose Callejon and let the ball bounce several times before scoring with a dipping half-volley over goalkeeper Etrit Berisha in the 65th minute.

The Belgian, who had not scored in his last nine league games, took his tally for the season to 11.

It helped his side to extend their unbeaten away record in the league to 24 games.

Lazio went ahead through Luis Alberto in the 23rd minute, but they were pegged back by Manuel Pucciarelli’s goal two minutes later.

They regained the lead through Sergej Milinkovic-Savic just after the half hour.

Immobile, who has scored 20 league goals this season, limped off shortly afterwards.

Chievo were awarded a penalty kick in first-half stoppage time for a foul by Senad Lulic on Mariusz Stepinksi.

But the referee changed his mind after consulting the video replay system (VAR).

Milinkovic-Savic scored the third with a brilliant volley in the 68th minute before Bastos and Nani added two more in the final 10 minutes to floor the Flying Donkeys.

Quagliarella opened his account against Fiorentina after half an hour, and fired home the second after 60 minutes.

He completed his hat-trick with a close-range effort as Sampdoria moved up to sixth on 33 points.

Carlos Sanchez scored a consolation for the visitors.

Udinese were held 1-1 at home by SPAL and Torino’s visit to Sassuolo ended with the same scoreline.

Milan fell behind after eight minutes at Cagliari when Nicolo Barella, later sent off for a second bookable offence, scored with a shot which bounced awkwardly in front of Gianluigi Donnarruma.

Kessie levelled from a penalty kick in the 35th minute and the Ivorian struck again six minutes later.

Milan defender Ricardo Rodriguez was sent off in the 81st minute for two yellow cards, both for fouls on Paolo Farago.