City ease into FA Cup 5th round with 2-0 win 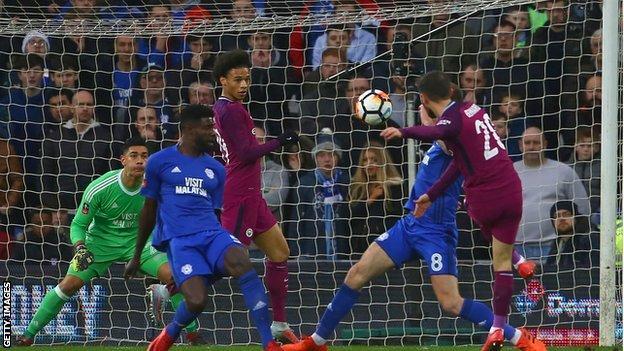 Manchester City eased into the FA Cup fifth round with an authoritative win away against Championship side Cardiff City.

A record crowd for Bluebirds games at the Cardiff City Stadium was dumbfounded into silence as Kevin de Bruyne cheekily rolled a free-kick under the jumping wall to give the visitors a lead, which Raheem Sterling doubled with a header before half-time.

Those goals bookended an excellent Bernardo Silva strike which was incorrectly disallowed for offside, which had little bearing on the result but might have been awarded had the video assistant referee (VAR) system been in use at the match.

BBC reports that City missed chances to extend their lead in the second half – notably Sterling being denied by a fine covering tackle by Sean Morrison – but they were seldom troubled by Cardiff, who ended the game with 10 men after Joe Bennett’s late red card.

This was a fixture which produced a memorable upset in 1994, as Nathan Blake’s spectacular curling effort gave Cardiff – then struggling in the third tier – a 1-0 win over top-flight City at Ninian Park.

But there was never the prospect of a shock result on this occasion, with runaway Premier League leaders City progressing to keep alive their hopes of completing an unprecedented quadruple of major domestic and European trophies.