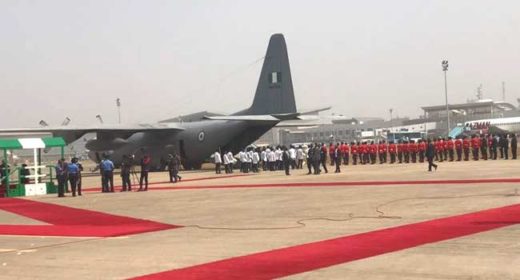 The Police Command in Enugu State has assured that there would be tight security in the state ahead of the commendation service and service of songs  in honour of late former Vice President, Dr Alex Ekwueme on Jan. 30.

The command’s Public Relations Officer, SP Ebere Amaraizu, told the News Agency of Nigeria (NAN) on Monday in Enugu that strategies had been mapped out for hitch-free events in the state.

Amaraizu said the police in conjunction with other security agencies had put in place effective and robust security mechanism, especially around hotels and venues of the events.

He added that “police is leaving no stone unturned to ensure safety before, during and after the service of songs and commendation service for the late former vice president.

READ: Ekwueme wanted to see ‘Nigeria be a nation, not just a country’ – Osinbajo

“We made an elaborate plan to ensure security of lives and property throughout the events.

“We are partnering with sister security agencies to provide us with more men and specialties in specific areas.

“So, I am assuring visitors and friends coming to pay their last respect to our dear father and former vice president to feel at home as police and other security agencies have them covered and protected.”

The PPRO urged residents of Enugu to promptly report any suspicious person, movement or object found in their neighbourhood to the nearest police personnel or station for prompt intervention.