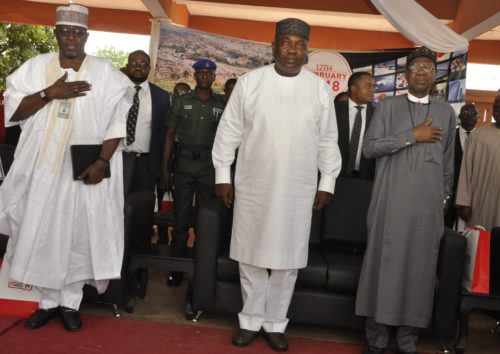 Director General of the National Broadcasting Commission,
Mallam Is'haq Modibbo Kawu; Governor Ifeanyi Ugwuanyi of Enugu State and the Minister of Information and Culture, Alhaji Lai Mohammed, at
the launch of the Digital Switch Over in Enugu on Monday.

The Minister of Information and Culture, Alhaji Lai Mohammed, has set up a task team of industry experts to work out the modality for setting up a scientific Audience Measurement System, as part of measures to boost radio and television advertising revenue in the country.

The Minister announced the setting up of the team in Enugu, Enugu State, on Monday, at the launch of the Digital Switch Over (DSO) in television in the state, noting that bringing Nigerian TV
advertisement market in line with global best practices could bring an additional 200-400 million dollars in revenue to the industry.

He said the task team will comprise representatives of the National Broadcasting Commission (NBC), Advertising Practitioners Council of Nigeria (APCON), Broadcasting Organisations of Nigeria (BON), Signal Distributors, and Advertisers’ Association of Nigeria (ADVAN), among
others.

The Team’s terms of reference include to identify best practice Audience Measurement System that will support the sustainable growth of the Nigeria Creative and Entertainment Industry; recommend a framework for supporting the sustainability of the Audience Measurement System, independent of the Federal Government, and recommend a payment and disbursement framework among the key stakeholders in the industry.

Alhaji Mohammed said the current Diary Audience Measurement System is not ideal for the critical transitional phase before full Digital Terrestrial Television (DTT) migration, adding: ”We need an objective and scientific Audience Measurement System that articulates the value of the content to consumers as well as the value of the audience to advertisers, particularly in the television sector.”

He said the delay in adopting a scientific Audience Measurement System had resulted in under-investment in the sector, which is necessary to foster the growth of the industry as the advertising community continues to rely on subjective factors when making decisions on the content they want, as opposed to how many viewers the content truly attracts.

”As a consequence, television platforms are subjected to renting out space on their channels to sustain their business, and content producers have become increasingly over-reliant on sponsorship which, unfortunately, skews the authenticity of their creative output in favor of a few decision makers, rather than the millions of TV viewers,” the Minister said.

On the DSO launch in Enugu, Alhaji Mohammed said the state is the fifth, after Plateau, FCT, Kwara and Kaduna, to enjoy digital television.

”There is no better evidence of our commitment to rapidly spread the massive benefits of digital television to the people of Nigeria…We are now at the cruise level of the journey we started in Jos Plateau State, in April 2016, as the DSO train has now traversed Abuja, Ilorin, Kaduna, to arrive here in Enugu, its latest stop. From here, the DSO train will proceed to Osun State, as we continue our rapid rollout of digital television across the country,” he said.

Tags:   Radio Advert Revenue   The Minister of Information and Culture