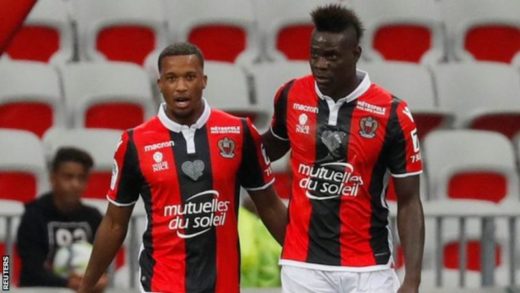 Nice striker Mario Balotelli scored twice in the first half hour only to be upstaged by a Manuel Fernandes hat-trick.

Lokomotiv Moscow hit back to win 3-2 in a pulsating Europa League last 32 first-leg tie on Thursday despite Balotelli’s brace.

Arsenal and AC Milan enjoyed 3-0 away wins, at Ostersunds and Ludogorets Razgrad respectively, while Michy Batshuayi scored twice to give Borussia Dortmund a 3-2 win over Atalanta in the first of two Bundesliga-Serie A clashes.

Balotelli took his tally to 21 goals this season for Nice, where he is in his second season and enjoying a new lease of life.

The maverick Italian slotted home after four minutes and converted a penalty in the 28th, sending Lokomotiv keeper Guilherme the wrong way after a Nemanja Pejcinovic handball.

Not to be outdone, Fernandes replied with a penalty before halftime and curled in a free kick to equalise in the 67th before completing his second Europa League hat-trick this term from Anton Miranchuk’s cross.

Arsenal’s Nacho Monreal and Mesut Ozil were on target in Sweden either side of a Sotirios Papagiannopoulos own goal.

Like the Londoners, Milan’s best hope of Champions League football next season appears to be by winning the Europa League.

Batshuayi took his tally to five goals in three games since joining Dortmund on loan from Chelsea.

His brace against Atalanta hauled Dortmund  back from 2-1 down after Josip Ilicic scored twice in five minutes after the break for the Italians.

Athletic Bilbao striker Aritz Aduriz, 37, scored twice in a 3-1 win at Spartak Moscow, while their Basque rivals Real Socieded were held 2-2 at home by Salzburg.

Sporting’s Bruno Fernandes, Gelson Martins and Seydou Doumbia scored in an eight-minute spell after halftime as they came from behind to win 3-1 on Astana’s artificial pitch in Kazakhstan where Marin Tomasov gave the hosts an early lead.

The roof was closed for the match with temperatures hovering around minus 20 Celsius outside.