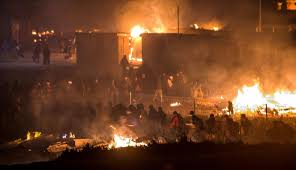 The fire started at about 5:30 pm on Tuesday and gutted the entire camp settlement, which provided shelter to hundreds of persons displaced by Boko Haram insurgency.

A witness, Bukar Abba, disclosed that the fire rapidly spread and engulfed the entire camp due to the strong wind.

Abba said that the fire ravaged tents, thatch houses, household utensils, dresses and other property, adding that there were no causalities in the incident.

“The cause of the fire has not been ascertained. It destroyed the camp. The affected families now stay in the open,” he said.

Abba noted that the affected persons had returned and took shelter at the camp following the liberation of the community from the insurgents’ control.

He called on the state government and humanitarian organisations to assist the victims to alleviate their sufferings.

The national and state emergency management agencies are yet to comment on the incident.