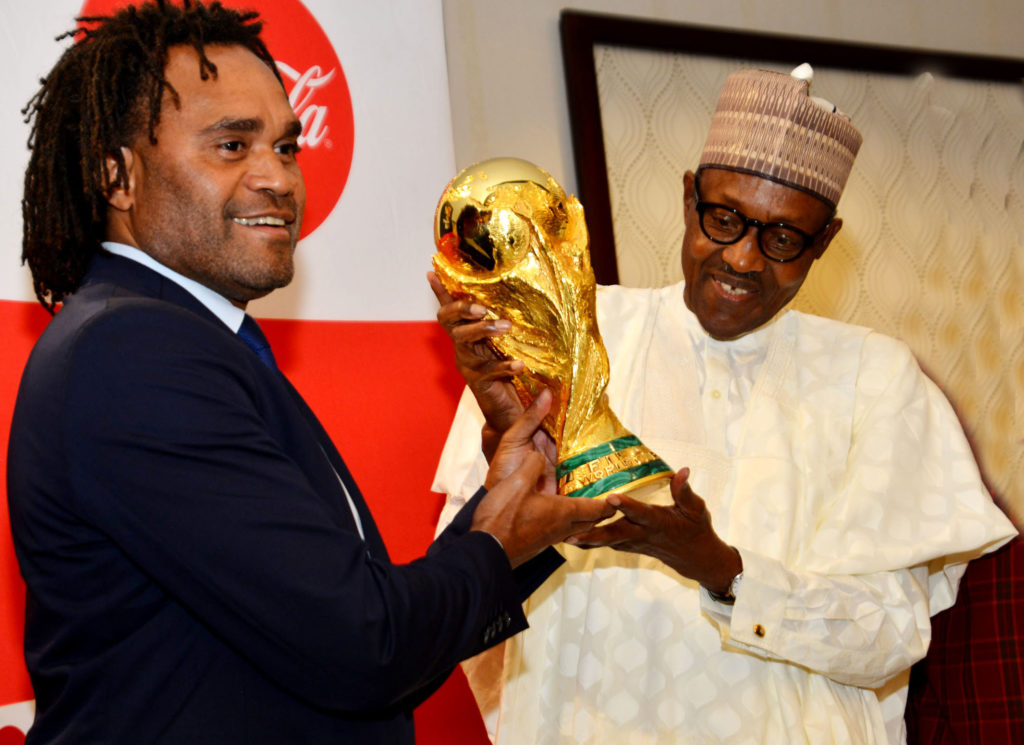 Speaking at the event, President Buhari noted with delight that the Super Eagles was the first African team to qualify for the 2018 World Cup.

The president pledged his administration’s support for the team towards winning the trophy in June.

According to him, football has been a great unifying factor among the ethnic groups in the country.

He lauded the world football ruling body for allowing the trophy to tour two cities in Nigeria, Abuja and Lagos.

“I wish to thank FIFA for deeming it fit to include two cities in Nigeria, Abuja and Lagos, in the FIFA World Cup Trophy tour by Coca Cola.

“Football has a cult followership in Nigeria. Our passion for football cut across all ethnic groups and also plays a key in unifying our peoples from various backgrounds,’’ he said.

President Buhari commended Coca Cola for investing part of its resources in the development of football in Nigeria and urged other organisations to emulate the company.

He also appreciated the efforts of members of the CHAN Eagles that won silver in Morocco as well as the 2018 Nigeria’s Bobsleigh Winter Olympics in South Korea.

“We are proud of you and the team to the Bobsleigh Winter Olympics in South Korea,’’ he said.

The Minister of Sports and Youth Development, Mr Solomon Dalung, appreciated the efforts of President Buhari for his continued support for the Super Eagles and other sport activities in the country.

He disclosed that the two ladies that brought honours to Nigeria at the Bobsleigh Winter Olympics in South Korea deserved commendation.

He said that the duo, who were based in the United States, sponsored their training and participation at the competition.

In his remarks, the FIFA representative, Mr Christian Karembeu, who presented the FIFA World Cup trophy to President Buhari, urged the Super Eagles to believe in themselves in order to go far in the competition.

The President of Coca Cola West Africa, Peter Njonjo, revealed that the FIFA World Cup Trophy Tour was launched in 2006 as an exclusive partnership by FIFA and Coca Cola.

He expressed the hope that the ceremony on Wednesday would turn out to be “a dress rehearsal for the return of the trophy in July if the Super Eagles wins the competition.’’