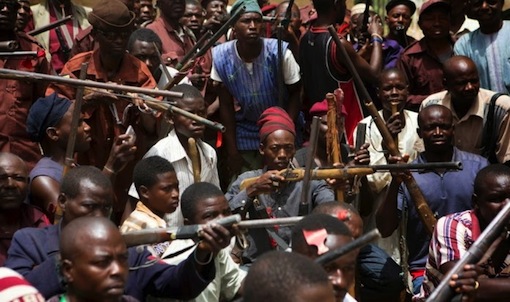 The Kaduna State Police Command, on Wednesday agreed to partner with hunters in addressing security challenges in the state.

The Commissioner of Police in the state, Mr Austin Iwar said after a closed door meeting with the state hunters association that the police would tap from their experiences in tracking criminals.

Iwar described the hunters as very important elements in the society, saying that the police would use their expertise to hunt for criminals.

The commissioner, however, said that those to be incorporated would undergo relevant briefings and training before bringing them into the security system.

He said the steps were necessary to regulate the hunters’ activities, adding that the interaction was to encourage hunters with illegal weapons to hand them over.

“Some have illegal weapons with them; we want to encourage them to return it to the state. It is also to train them in the new responsibility that they have chosen to participate.’’

Iwar added: “everybody has a responsibility to safety and security; I think that is why the hunters decided on their own to be involved, but they need to be regulated.’’

On the two weeks ultimatum he gave to local street gangs called Sara Suka to reform, the commissioner said a massive operation was on to arrest the miscreants.

“The Division Police Officers have carried out operations which had led to arrest of several of them and some have been charged to court for prosecution.

“The operation will continue, but we need members of communities to cooperate with us.’’

The commissioner also visited Television and Sabo motor parks to engage the people on the importance of community policing.

Iwar assured them that the police would increase level of security in motor parks and markets.

He appealed to the communities to support the police achieve the best they can give in ensuring security and safety in the state.

Mr Sunday Kanu, Secretary of Luxurious Buses Association at Television garage, commended the police for reaching out to residents on the need to enhance security.

He expressed the belief that the effort would ensure that peace and security return to motor parks, and pledged total support to the initiative.