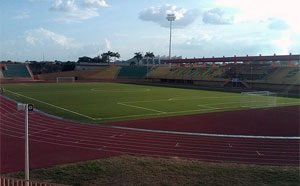 The Kwara State Government will speedily undertake the rehabilitation of the portion of the Kwara Sports Stadium Complex in Ilorin affected by a heavy downpour on Tuesday evening, an official says.

The Permanent Secretary in the state Ministry of Sports and Youth Development, Ayobola Samuel, gave the assurance on Wednesday after assessing the damage done to the facilities.

He pointed out that the damage was enormous. “Virtually the whole stadium was affected by the heavy downpour.

“The damage is massive because it touched virtually the whole stadium, from the swimming pool to the main bowl to the indoor sports hall.

“Electricity was also affected. It is a pathetic situation we have found ourselves.

“But as we have seen the damages, we will begin work on the ones we can fix within the shortest time and without delay.

“We will also see how we can fasttrack the ones that will take some longer time to repair,” Samuel said.

The commissioner said the Sports Council, whose offices were also affected by the downpour, would be relocated to a place within the stadium complex to allow for repair works.

One of the contractors who handled the works when the stadium was renovated a few years ago, Kayode Makanjuola, described the situation as unfortunate.

“The electronic scoreboard damaged by the storm is one of the best in the country,’’ he said.

Makanjuola, who is an architect, said the contractor who installed the scoreboard had been contacted and was expected in Ilorin for further assessment of the damage.

He said the interior of the Indoor Sports Hall would be attended to on time so that it would continue to be used in no distant time.

The Stadium Manager, Wale Obalola, told the newsmen, that the stadium could successfully host a football match with just little work on the perimeter fencing.

“It is however a regret that the Milo Secondary School Basketball Championships scheduled for the indoor sports hall of the stadium may not hold there again, except something urgent is done,’’ he said.