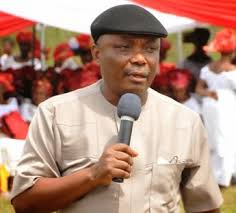 He is to remain behind bars until April 27, the court ruled.

Nwaoboshi had appeared before the court charged with a N805 million fraud by the Economic and Financial Crimes Commission (EFCC).

He had entered a plea of ‘not guilty’.

Arguing his bail application before the court, the defence counsel, Dr V. J. O. Azinge (SAN), urged the court to grant the accused bail on self-recognizance as a senator of the Federal Republic of Nigeria.

In the bail application brought pursuant to the provisions of the Administration of Criminal Justice Act as well as the 1999 Constitution, Azinge told the court: “Where it is not inclined to granting bail on recognizance, then bail should be made on liberal terms.

Among other grounds for the application, Azinge informed the court that the accused was a cardiac patient, who required constant health checks.

She also argued that as a Senator and senior citizen, the accused sits at the Upper Legislative Chambers and has a mandatory requirement to represent his constituency.

According to the defence counsel, the charge against the accused had lingered since 2017, and noted that the accused was granted administrative bail by the commission, he never jumped bail.

She added that the accused is a qualified lawyer of 28 years experience and described him as an “Oracle and a man of integrity”.

She urged the court to grant the bail application.

But the EFCC Prosecutor, Mr M. S. Abubakar, opposed the application and urged the court to refuse bail and order the remand of the accused.

He said it was not the duty of the defence counsel to dictate to the court the manner it will undertake proceedings, adding it is purely the court’s discretion.

After listening to the arguments of both counsel, Justice Mohammed Idris adjourned the case until April 27 for ruling on the application.

Defence counsel urged the court to allow the accused to remain at the EFCC custody where he had been, pending the ruling.

But in opposition, the prosecutor said: “My Lord, the matter is out of the jurisdiction of the EFCC and now before the court; the defence had argued that the defendant’s health deteriorated while in our custody, so we do not want his health to further deteriorate.”

Justice Idris consequently ordered that the accused should be remanded in Ikoyi Prison pending the determination of his bail.

The EFCC alleged that the accused committed the offences between May and June 2014 in Lagos.

Nwaoboshi was said to have acquired a property described as Guinea House, Marine Road, in Apapa, Lagos, for the sum of N805 million “when he reasonably ought to have known that N322 million out of the purchase sum, formed part of proceeds of an unlawful act”.

The sum was said to have been transferred to the vendors by order of Suiming Electrical Ltd.

Suiming Electrical was said to have on May 14, 2014, aided Nwaoboshi and Golden Touch to commit money laundering.