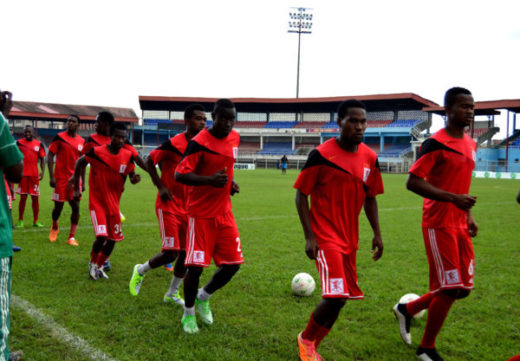 The League Management Company (LMC) handed down the sanction to the Umuahia-based club, following attack on match officials by irate fans at the end of a one-all draw with visiting Katsina United FC a fortnight ago.

Abia Warriors took the lead in the 36th minute of the encounter when midfielder Arinze Nwanguma fired home a shot from outside the 18-yard box.

The team sustained the pressure against the visitors and were rewarded in the 64 when Ndifereke Effiong skillfully pulled the ball above a badly-positioned Rivers United goalkeeper into the net for Abia Warriors’ second goal.

Rivers United Malachy Ohaume however reduced the tally when he shot the ball into the net during a goal-mouth scramble for the visitors’ lone goal in the 78th minute.

In a post-match interview, Rivers United Coach Stanley Eguma expressed disappointment over the outcome of the match, saying that they were in Umuahia to pick a point.

Eguma said that his team played well and blamed Abia Warriors’ second goal on momentary loss of concentration by his goalkeeper.

He said that the team would go back to the drawing board to work on their weak points, saying that they hoped to do better in the second stanza of the league.

He said that the club might recruit two or three fresh players to help boost the performance of team in the next lap of the league.

Also speaking, Coach Emmanuel Deutsch of Abia Warriors gave kudos to his boys, saying that they worked hard for the victory.

Deutsch said that he was particularly happy with the outcome of the match because many people predicted that the team might not do well without support from the home fans.

“Many people thought that we will not win because we are playing behind closed-door, but I am happy that we have won,” he said.

Meanwhile, Abia Warriors injured goal-merchant, Sunday Adetunji, who was out since August 2017 following a fracture he sustained during the team’s home match against Lobi Stars, returned to action on Sunday.

In an interview with newsmen, Adetunji said that he had fully recovered and certified medically fit.

He thanked his fans for their support and prayers and assured them that with time, he would regain his form and begin to score goals for the team.