Metuh's trial continues in his absence 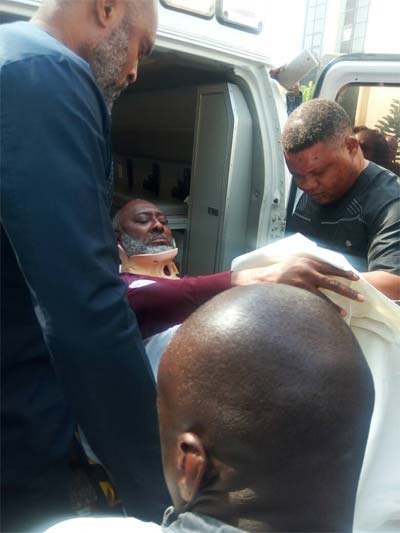 Metuh being taken out of the ambulance

The trial of the former Publicity Secretary of the Peoples Democratic Party, PDP, Mr. Olisa Metuh continued on Tuesday at the Federal High Court in Abuja despite his absence.

At the trial which commenced on Tuesday, counsel to his company, Destra Investment which is also on trial asked the court for an adjournment because Metuh is receiving treatment at the hospital.

But the prosecutor, Mr Sylvania Tahir, in his reply to the application said that it has not been brought to the notice of the court what transpired after the defendant was taken to the hospital, especially because the court did not invite the medical personnel who attended to the defendant.

Mr Tahir said as a result of that Metuh is not entitled to enjoy the benefits of section 266 of ACJA.

According to him, it should not be presumed that the court or the prosecution knows the state of the accused person at the moment as there is no medical report before this court explaining the absence of the defendant in this case.

He noted that what is playing out is a complete disregard and disobedience to the authority of the court and the judiciary.

Mr Tahir said that there is no reasonable explanation for the absence of the defendant and so he cannot enjoy the benefits of section 266 of ACJA.

“We are urging the court to invoke the subsection A of the said act to take the conduct of the accused yesterday and continuance today as misconduct and proceed with the trial in his absence”.

He said that going on with the trial in the absence of Metuh will not amount to the violation of the right to fair hearing as submitted by counsel to Destra in his submission.

He added that a defendant cannot hold the court to ransom by doing things or taking steps deliberately intended to scuttle or frustrate the fair trial of a case, Channels tv reports.